Aura of the Cause

The Aura of the Cause: A Photo Album for North American Volunteers in the Spanish Civil War was curated by Cary Nelson and first opened in Toronto in 1997.

This exhibit provides the most detailed photographic record to date of the experiences of North American volunteers in the Spanish Civil War. The photographs depict scenes of daily life in the International Brigades, ranging from behind the lines images of Spanish civilians to group shots of soldiers, medical personnel, and men in battle.

About The Aura of the Cause

The Aura of the Cause: A Photo Album for North American Volunteers in the Spanish Civil War was curated by Cary Nelson and first opened in Toronto in 1997.

This exhibit provides the most detailed photographic record to date of the experiences of North American volunteers in the Spanish Civil War. The photographs depict scenes of daily life in the International Brigades, ranging from behind the lines images of Spanish civilians to group shots of soldiers, medical personnel, and men in battle.

The Aura of the Cause is a traveling exhibition featuring 190 documentary photographs, many never before displayed, of the Abraham Lincoln Brigade, one of the five international brigades which fought against Franco’s forces in the Spanish Civil War between 1936-1939. The exhibition also includes nine wartime photographs by the renowned photographer Robert Capa, including the single most famous photograph of the war, a Spanish Republican militiaman being shot in mid-stride. Curated by University of Illinois Professor Cary Nelson with assistance from USF Professor Fraser Ottanelli and Peter Carroll for ALBA, The Aura of the Cause is the largest photographic exhibit ever mounted about the Spanish Civil War.

The Spanish Civil War had a lasting impact on Spain and the world. According to Museum Director T. Marshall Rousseau, “This is an important show in that it lends insight into a critical period in the Spain of Dali’s lifetime, as well as in our own history. Dali, like many artists and writers of his day, was significantly affected by this war and created one of his most powerful works in response: the profoundly anti-war Soft Construction with Boiled Beans: Premonition of Civil War (1936, Philadelphia Museum of Art).”

While the memory of the war becomes more vague over time, the Spanish Civil War was the defining experience for many Americans in the late 1930s as they came to terms with fascism abroad. The importance of the war, and the impact it had on a generation of American volunteers, is best expressed by Professor Cary Nelson, curator of the exhibition, in the following essay:

The Spanish Civil War and the International Brigades
The outbreak of the Spanish Civil War in July 1936 shocked the world, riveting attention on the looming conflict between the forces of fascism — Hitler’s Germany, Mussolini’s Italy, and General Francisco Franco’s rebellious Spanish army — and the democratically elected Spanish republic, which symbolized the hopes of anti-fascist peoples around the globe. Great Britain, France, and the United States, fearful of provoking a second world war, chose policies of neutrality and appeasement, despite fascist intervention on Franco’s side, while the Soviet Union, pariah among nations, sent aid to the Republic.

Yet the struggle in Spain could not be limited by the policies of self-interested governments. As the Spanish people battled heroically against ov

erwhelming odds, private citizens from all continents –some 40,000 individuals from 52 countries — journeyed to Spain to join the anti-fascist crusade. There they formed the International Brigades, an army unique in history. These were no mercenaries or soldiers of fortune. They were volunteers who earned nothing for their efforts and sacrifice save the pride in knowing they had tried to stop the spread of fascism, tried to avert a larger, global war.

From the U.S. came 2,800 volunteers, from Canada came 1,200, from Cuba came 800. They came from virtually every state or province and seemingly from every walk of life. The Canadians eventually named themselves the MacKenzie-Papineau battalion, commemorating two 19th-century anti-imperialists. The Americans named themselves after Lincoln, their sixteenth president. The Internationals became famous for their courage under fire and for their commitment to principles of social justice. The Lincolns were the first fully integrated army in American history. Doctors and nurses also flocked to Spain to save the lives of soldiers and civilians alike. Still, thousands of young international volunteers were buried in Spanish earth.

And a pantheon of international writers and artists embarked for Spain to bear witness to the brutal, passionate war, and to lend their voices and their talent [sic] to save the Spanish Republic. Some–George Orwell, the poet Edwin Rolfe, the novelists AndrÃ© Malraux and Alvah Bessie, the sculptor Paul Block, the painter Mildred Rackley–served in the ranks. Others, like Ernest Hemingway, Langston Hughes, Dorothy Parker, and Lillian Hellman, experienced the war as journalists. Still others, stamped in the crucible of war, discovered in Spain an artistic sensibility that shaped the remainder of their lives. 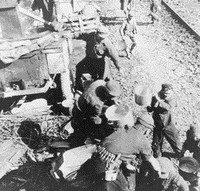 rs–writers, artists, photographers–testify today to the continuing power of the war. For despite the sympathy of good men and women around the world, the fascist armies defeated the Spanish Republic in 1939. Six months later, the same air forces that destroyed the Basque town of Guernica were dropping bombs on Warsaw in Poland. “It was in Spain,” wrote Albert Camus, “that [my generation] learned that one can be right and yet be beaten, that force can vanquish spirit, that there are times when courage is not its own recompense. It is this, doubtless, which explains why so many, the world over, feel the Spanish drama as a personal tragedy.”