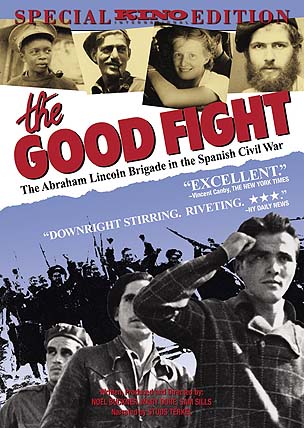 This documentary presents the experiences of the Abraham Lincoln Brigade, comprised of American volunteers who fought with the Republicans during the Spanish Civil War. Using archival footage and interviews with survivors, the filmmakers explore the war’s context, including the rise of Fascism and the perils of reaching Spain for volunteers, as well as the limited training, heavy responsibilities thrust on the very young, deprivations of a soldier’s life, lack of material, and the horrible rates of casualties. This film is a good introduction to the issues and participants surrounding the Spanish Civil War.

Narrated by Studs Terkel, The Good Fight explores a significant gap in our history through its use of newsreels, photographs, interviews with Lincoln veterans and Depression-era music. The eleven surviving veterans of the war who appear in this tough, stirring film share a common pride in their sacrifices of seventy years ago when the rise of world fascism crushed the spirit of democracy in a tragic rehearsal for World War II.

Read more about the Lincoln Brigade by filmmaker Sam Sills.

Read our review in the Volunteer Magazine

Find out more about the Film Here

“There was a moment in this century when the simple word, ‘Spain’ brought a surge of emotion and the quietly uttered phrase ‘Lincoln Brigade’ a thrill of recognition. The Good Fight is an extraordinary recapturing of that lost moment. One can too easily forget, in a decade of despair, what this film reminds us of: that in every time, however, grim, there are men and women of passion and courage on whom one can count.” —Howard Zinn, Professor Emeritus, Boston University

“The Good Fight makes history dance. This unusual documentary is a reminder that brave people are the conscience of any generation. It stirs pride at what citizens who take American values seriously have done and still might do.” —Boston Globe Editorial

What the Critics Say

“Just about the most stirring documentary you’ll ever see. . . . What comes over most strongly is the resolute idealism of those who fought, and did so in a way that seems impossibly heroic in these unheroic times.” —Time Out, New York

“This excellent chronicle narrated by Studs Terkel is nothing less than a rousing history of the American political right, left and center for the last half-century.” —Carrie Rickey, Boston Herald

“This unusually engaging historical documentary thus also serves as a moving tribute to a remarkable group of men and women. By making their heroism understandable in human terms, The Good Fight also encourages the belief that it is a trait which each of us, at our best, would posses.” —Gary Crowdus, Cineaste