4. Some Questions To Consider:

5. Closure: Conduct by countries on both sides led to the creation of two-post war documents – the Geneva Convention of 1949 and the United Nations Universal Declaration of Human Rights – that addressed the treatment of civilians. To what degree have these rights been upheld from their inception to present day?

“Guernica, the most ancient town of the Basques and center of their cultural tradition, was completely destroyed yesterday afternoon by insurgent air raiders. The bombardment of this open town far behind the [front] lines occupied precisely three hours and a quarter, during which a powerful fleet of airplanes consisting of three German types, Junkers and Heinkel bombers and Heinkel fighters, did not cease unloading on the town bombs weighing from 1,000 pounds downwards and, it is calculated, more than 3,000 two-pounder aluminum incendiary projectiles. The fighters, meanwhile, plunged low…to machine-gun those of the civilian population who had taken refuge in the fields…The whole of Guernica was soon in flames… In the form of its execution and the scale of destruction it wrought, no less than in the selection of its objective, the raid on Guernica is unparalleled in military history. Guernica was not a military objective. A factory producing war material lay outside the town and was untouched. So were two barracks some distance from the town. The town lay far behind the lines. The object of the bombardment was seemingly the demoralization of the civil population and the destruction of the cradle of the Basque race….” 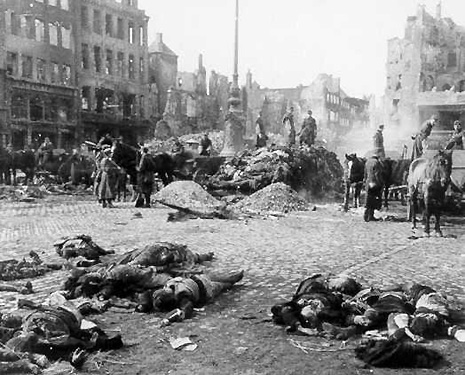 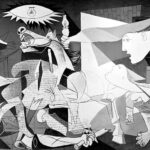 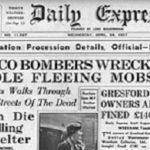 Art. 3. A belligerent party which violates the provisions of the said Regulations shall, if the case demands, be liable to pay compensation. It shall be responsible for all acts committed by persons forming part of its armed forces.

Art. 23. In addition to the prohibitions provided by special Conventions, it is especially forbidden

(e) To employ arms, projectiles, or material calculated to cause unnecessary suffering;

(g) To destroy or seize the enemy’s property, unless such destruction or seizure be imperatively demanded by the necessities of war

Art. 25. The attack or bombardment, by whatever means, of towns, villages, dwellings, or buildings which are undefended is prohibited.

The President of the United States to the Governments of France, Germany, Italy, Poland and His Britannic Majesty, September 1, 1939:

The ruthless bombing from the air of civilians in unfortified centers of population during the course of the hostilities which have raged in various quarters of the earth during the past few years, which has resulted in the maiming and in the death of thousands of defenseless men, women, and children, has sickened the hearts of every civilized man and woman, and has profoundly shocked the conscience of humanity. If resort is had to this form of inhuman barbarism during the period of the tragic conflagration with which the world is now confronted, hundreds of thousands of innocent human beings who have no responsibility for, and who are not even remotely participating in, the hostilities which have now broken out, will lose their lives.

I am therefore addressing this urgent appeal to every government which may be engaged in hostilities publicly to affirm its determination that its armed forces shall in no event, and under no circumstances, undertake the bombardment from the air of civilian populations or of unfortified cities, upon the understanding that these same rules of warfare will be scrupulously observed by all of their opponents. I request an immediate reply. FRANKLIN D. ROOSEVELT 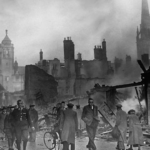 Photograph – Luftwaffe bombardment of Coventry (from BBC History, http://www.bbc.co.uk/history/events/the_blitz).
Caption: “People in Coventry walk to work past smouldering piles of rubble after a bombing raid in 1940.” 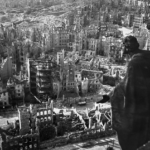 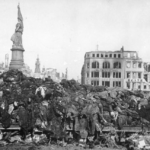 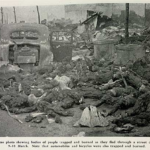 The [German] High Command said in its communique today: “The enemy again attacked the German capital last night, causing some damage to persons and property as a result of his indiscriminate throwing of bombs on non-military targets in the middle of the city. The German air force, as reprisal, has therefore begun to attack London with strong forces”… The statement of the High Command… deliberately perpetrates the lie that Germany has only decided to bomb London as a result of the British first bombing Berlin. And the German people will fall for this, as they fall for almost everything they’re told nowadays… And so tonight the High Command, which all good Germans believe tells only the gospel truth, issued a special communique saying that as reprisal for the British raids on Berlin, London was attached with strong forces for the first time today… The German people have no inkling – because the Nazi press and radio have carefully suppressed the story – that in August alone more than one thousand English civilians were killed by the Luftwaffe’s attacks on British “military objectives”… All Sunday morning papers carry the same headline: “BIG ATTACK ON LONDON AS REPRISAL.” (William L. Shirer, Berlin Diary, pp.499-501)

Narrative of a fire warden on watch in Hamburg, Germany, during the bombing of Hamburg by the RAF, July 7, 1943.

Suddenly there came a rain of fire from heaven. We tried to get out to pump but it was impossible. The air was actually filled with fire. It would have meant certain death to leave the shelter… Smoke seeped into the shelter through every crack. Every time you opened the steel doors you could see fire all around… Then a storm started, a shrill howling in the street. It grew into a hurricane… the whole yard, the canal, in fact as far as we could see, was just a whole, great massive sea of fire.

Letter from six Coventry citizens to the New Statesman.

Sir – Many citizens of Coventry who have endured the full horror of intense aerial bombardment would wish to dispute statements made in the Daily Express to the effect that all the people of Coventry expressed the opinion that they wished to bomb, and bomb harder, the peoples of Germany. This is certainly not the view of all or even the majority of the people of Coventry. The general feeling is, we think, that of horror, and a desire that no other peoples shall suffer as they have done. Our impression is that most people feel the hopelessness of bombing the working classes of Germany and very little satisfaction is attained by hearing that Hamburg is suffering in the same way as Coventry has suffered.

“Dresden, the seventh largest city in Germany and not much smaller than Manchester, is also far the largest unbombed built-up the enemy has got. In the midst of winter with refugees pouring westwards and troops to be rested, roofs are at a premium. The intentions of the attack are to hit the enemy where he will feel it most, behind an already partially collapsed front, to prevent the use of the city in the way of further advance, and incidentally to show the Russians when they arrive what Bomber Command can do.”

“Lisieux and Caen are examples of the inflexibility of the four-motor heavy bombers: it cannot block a road without bringing down a city. I’m not surprised that our troops advancing between Caen and Lisieux were fired on by French civilians. No doubt many Frenchmen found it hard to be liberated by a people who seem, by their actions, to specialise in the mass murder of their friends… In Emmerich [Germany] I saw no building whatever intact… This process, when the town was an Allied one, we referred to with bitter mockery as ‘Liberation.’ When you said that such-and-such a place had been ‘liberated,’ you meant that hardly one stone still stood upon another.

Was Coventry a Military Target? –from “Coventry’s Blitz” http://www.historiccoventry.co.uk/blitz/blitz.php

Even allowing for our manufacturing targets, the justification for the bombing methods used in this raid is questionable… The military usefulness of the raid was not great – of the factories that were destroyed, most were in or near the city centre, and comprised mainly smaller firms. The larger factories further out were generally back to full capacity within weeks, and most multiplied their output after the raid.

In support of the idea that this was primarily a terror raid, we can look at the some of the bombing methods. The Luftwaffe had accurate maps of Coventry, so they would’ve been aware that wiping out Coventry’s city centre, an area roughly half by three quarters of a mile, was largely going to destroy shops, churches and small businesses laid out around our mainly medieval street pattern. Once the initial “Pathfinder” bombers had dropped their flares and incendiaries to light up the target area, the subsequent bombers not only followed the path to the area, but actually flew in an alternate north-south then east-west pattern, to clinically and methodically raze the whole town centre to the ground.

Statistics on the Dresden firebombing:

From “A Forgotten Holocaust: U.S. Bombing Strategy, the Destruction of Japanese Cities & the American Way of War from World War II to Iraq,” by Mark Selden

While the Nuremberg and Tokyo Tribunals clearly articulated the principle of universality, the Tribunals, both held in cities that had been obliterated by Allied bombing, famously shielded the victorious powers, above all the US, from responsibility for war crimes and crimes against humanity. Telford Taylor, chief counsel for war crimes prosecution at Nuremberg, made the point with specific reference to the bombing of cities a quarter century later:

Since both sides had played the terrible game of urban destruction—the Allies far more successfully—there was no basis for criminal charges against Germans or Japanese, and in fact no such charges were brought . . . . Aerial bombardment had been used so extensively and ruthlessly on the Allied side as well as the Axis side that neither at Nuremberg nor Tokyo was the issue made a part of the trials. (Source: The Asia-Pacific Journal: Japan Focus)