i.      The Spanish Civil War was in one way a war between fascism and democracy, in which rebel forces supported by Italy and Nazi Germany overthrew a democratically elected republic. The republic received material support from the Soviet Union, which did not want to see fascism spread to Spain. Most other European countries (most notably England and France) and the U.S. remained neutral, although citizens from many countries including the U.S. defied neutrality laws and went to Spain to fight.

ii.      The eyes of the world were on Spain during this civil war, with citizens of many countries professing support for either the republic or the rebels. (It was not obvious to most people in 1936 that Nazi Germany would become a menace to civilization.)

iii.      The Spanish Civil War was the first time in which defenseless civilians were victims of widespread aerial bombing, in this case by German and Italian warplanes. The most notable example was in the Basque (northern Spain) town of Guernica, immortalized in a famous painting of the same name by Pablo Picasso. This was one of many events that swayed international public opinion against fascism.

iv.      In 1936 the rebel forces were led by avowed fascist Francisco Franco, who succeeded in his coup and ruled Spain as a military dictator from 1939 until his death in 1975. Although the fascist regimes of Hitler and Mussolini helped bring Franco to power, Spain remained neutral during World War II; furthermore, during his life and rule Franco expressed his hatred for Communism, in no small part because Stalin was an outspoken critic of fascism and supporter of the republic before its overthrow.

a.      Provide students with dictionary resources and ask students to define isolationism and interventionism. Help students create an agreed upon “working definition” of these terms.

b.      Divide the class into 10 groups. Give each group one of the 10 documents from Appendix I.

c.       Each group should answer the following questions, first quietly on their own, then in collaboration with their group members:

i.            What difficult vocabulary exists in the document? (Use your resources to define unknown words.)

iii.            Does the document illustrate U.S. support of isolationism or interventionism, or does it suggest a shift in policy from one to the other? What is in the document that tells you?

iv.            From what you have learned so far or what you can decipher from the document, what is the most important reason why the U.S. would support either isolationism or interventionism at the time period addressed by the document?

d.      In order of documents, from 1 to 10, have students create and then present their findings to the rest of the class. One option would be for teams to present a short skit illustrating the main idea of their document. As part of their skit, teams could do one or more of the following:

i.            Include a portrayal of the relevant president and use at least one direct quote that is indicative of the document, and/or include one order that the president might give to support isolationism or interventionism.

ii.            Act out placement of the U.S. on a continuum between isolationism and interventionism to observe change from document to document.

iii.            Act out the potential reaction of other countries’ leaders or citizens – from Spain, the Soviet Union, England, France – to the policy or action described.

As part of a larger unit on the Cold War, possible extended answer or essay questions could be:

“It is my determination to pursue a policy of peace and to adopt every practicable measure to avoid involvement in war. It ought to be inconceivable that in this modern era, and in the face of experience, any nation could be so foolish and ruthless as to run the risk of plunging the whole world into war by invading and violating, in contravention of solemn treaties, the territory of other nations that have done them no real harm and which are too weak to protect themselves adequately. Yet the peace of the world and the welfare and security of every nation is today being threatened by that very thing…

War is a contagion, whether it be declared or undeclared. It can engulf states and peoples remote from the original scene of hostilities. We are determined to keep out of war, yet we cannot insure ourselves against the disastrous effects of war and the dangers of involvement. We are adopting such measures as will minimize our risk of involvement, but we cannot have complete protection in a world of disorder in which confidence and security have broken down.

If civilization is to survive, the principles of the Prince of Peace must be restored. Shattered trust between nations must be revived. Most important of all, the will for peace on the part of peace-loving nations must express itself to the end that nations that may be tempted to violate their agreements and the rights of others will desist from such a cause. There must be positive endeavors to preserve peace.

Document 2: Excerpt from Neutrality Act of 1937

To amend the joint resolution, approved August 31, 1935, as amended. Resolved…

EXPORT OF ARMS, AMMUNITION, AND IMPLEMENTS OF WAR

SEC. 9. Whenever the President shall have issued a proclamation under the authority of section 1 of this Act it shall thereafter be unlawful for any citizen of the United States to travel on any vessel of the state or states named in such proclamation, except in accordance with such rules and regulations as the President shall prescribe…

This passport is not valid for travel to or in any foreign state in connection with entrance into or service in foreign military or naval forces.

This passport is not valid for travel in SPAIN

Document 4: Dominic Tierney,  FDR and the Spanish Civil War: Neutrality and Commitment in the Struggle that Divided America, 2007.

By the spring of 1938 Roosevelt’s support for the Loyalists was becoming increasingly trenchant, because of wider fascist aggression, evidence of German preparations for war, and fears that the Spanish Civil War could become a model for the German penetration of Latin America… despite his pro-Loyalism and his awareness of the Republican need for planes, Roosevelt was reluctant to attempt to lift the congressional embargo on arms sales to Spain… [yet] when [ambassador to the Spanish republic] Claude Bowers returned in 1939 and met FDR, he was informed, “We have made a mistake. You have been right all along.”

By late 1938, around the time of the Munich conference and the withdrawal of the International Brigades from Spain, Roosevelt recognized he was facing a bad situation. He apparently made a secret overture through personal channels to the French government, offering to ship airplanes to France if they would transship them to Spain.  The French rejected the offer and the deal was off.

The President… volunteered the statement that he had made a great mistake in the matter of the Spanish embargo, that he was sorry he had done this and that he would not do it again in similar circumstances. “But,” he said, “not only England and France but the Low Countries and the Scandinavian countries urged us to take the position that we did on the embargo because they thought that it might prevent the spread of the war.”

The fact that our government maintains formal diplomatic relations with the present Spanish regime should not be interpreted by anyone to imply approval of that regime and its sole party, the Falange, which has been openly hostile to the United States and which has tried to spread its fascist party ideas in the Western Hemisphere.  Our victory over Germany will carry with it the extermination of Nazi and similar ideologies.

When faced with the practical and persuasive arguments of [Secretary of State Dean] Acheson that… the dangerous world situation required the U.S. to seek bases in Spain, Truman eventually relented… The Soviet atomic test and Mao’s triumph in China gave rise to these fears, and the Korean War seemed to confirm them. The case for Spain became irresistible. No regime willing to help in this struggle could be held forever at arm’s length in such a crisis. In the case of this overwhelming opposition Harry Truman bowed to the pressure, surrendered his strongly held principles, and finally sent an ambassador to Spain… On the eve of the start of formal negotiations on a military pact with Spain in July 1951, Truman wrote Admiral Forrest Sherman, “I don’t like Franco and I never will, but I won’t let my personal feelings override the convictions of our military men.”

Document 9: Excerpts from “Military Facilities in Spain: Agreement Between the United States and Spain,” signed by Dwight Eisenhower, Sept. 26, 1953

Faced with the danger that threatens the western world, the Governments of the United States and Spain, desiring to contribute to the maintenance of international peace and security through foresighted measures which will increase their capability, and that of the other nations which dedicate their efforts to the same high purposes, to participate effectively in agreements for self-defense;

Have agreed as follows…

For the purposes of this agreement and in accordance with technical arrangements to be agreed upon between the competent authorities of both Governments, the Government of the United States is authorized to improve and fit agreed areas and facilities for military use, as well as to undertake necessary construction in this connection in cooperation with the Government of Spain; to station and house therein the necessary military and civilian personnel and to provide for their security, discipline and welfare; to store and maintain custody of provisions, supplies, equipment and material; and to maintain and operate the facilities and equipment necessary in support of such areas and personnel. 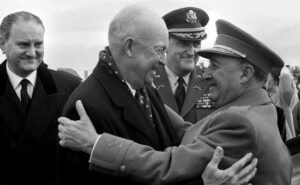