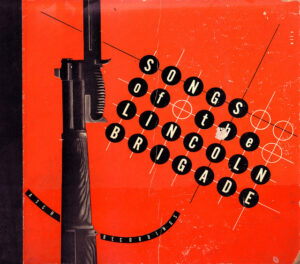 The Spanish Civil War spawned a huge number of songs, particularly on the Republican side. Many of these are available online; there are also a number of songbooks. A classic is the Anarchist hymn “A las barricadas”: classic version / modern version (Ana Belén & Víctor Manuel).

A Spanish-Civil-War-inspired song that became very popular in the United States–witness this oral history project (video) by James D. Fernández and Katie Halper–was “No Pasarán” (audio).

Songs from the Lincoln Brigade were made famous by Pete Seeger, Tom Glazer, and Woody Guthrie:

In 2014, the Smithsonian re-issued its legendary collections Songs of the Spanish Civil War. See this essay by Peter Glazer.