During the 1930’s, the world was in the grip of a severe, protracted economic crisis known as the Great Depression. Many people were in desperate need. During this time, several countries, notably Italy (under Benito Mussolini) and Germany (under Adolf Hitler), elected fascist governments which promised to end the crisis by taking drastic measures. These measures included military aggression and widespread persecution against ethnic minorities and working people.

Under Hitler’s dictatorship in Germany, and in the other European countries which he conquered, millions of innocent people were deported to concentration camps and murdered. This horrific episode in our modern history has come to be known as the Holocaust. The warning signs of advancing fascist aggression were already apparent to many people when a military rebellion was staged against the Spanish Republic in the summer of 1936. This rebellion lead to a civil war in Spain. The Republic had been established by popular election, following the abdication of King Alphonso XIII in 1931. (This was the second republic in Spain’s political history.) 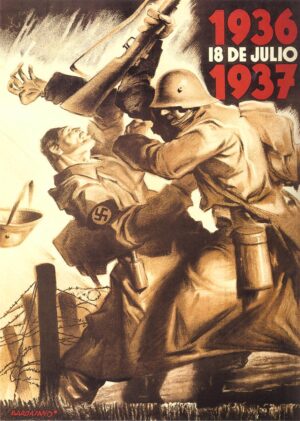 On July 18, 1936, there was world-wide alarm, as an avowed fascist, General Francisco Franco, threatened to overthrow the democratically elected government of the Spanish Republic. It was less than twenty years since the end of World War I, with its astounding casualty rate of ten million dead and another twenty million wounded. Many feared that the intervention of Mussolini and Hitler on the side of Franco in Spain would be the beginning of a second world war. Already, the German dictator Hitler was threatening neighboring countries, and Italy’s Mussolini had invaded the African country of Ethiopia the year before in 1935.

In the face of this imbalance, many Americans opposed U.S. neutrality as a matter of conscience. Some 2,800 men and women decided to go to Spain to fight for the Republic against Franco. These volunteers called themselves the Abraham Lincoln Brigade. The members of the Lincoln Brigade took a great personal risk in opposing the Neutrality Laws of the United States. Placing conscience above the law, they enlisted to help the Spanish Republic against Franco and fascism because they believed it was the only right action to take.

General Discussion Questions
Individuals throughout history have challenged the law and the status quo on conscientious grounds. This historical episode can serve as an exercise for discussion on the ethics of law versus individual conscience; and on the responsibilities of American citizens in the world.

– What happens when there is a conflict between the “conscience” of governmental leaders and the conscience” of individual citizens?
– What role does a concern for humanity and morality play in shaping a nation’s foreign policies?
– How can citizens know what is the appropriate policy for the U.S. to follow in any given world crisis?
– How do these questions apply specifically to the United States since the end of World War II?