Among the most numerous and powerful drawings are those depicting war. They vary greatly in style and skill of execution; they depict cityscapes and country scenes, yet almost all of them have one thing in common: airplanes. Aerial combat and bombing were new, and the greatest terror came from the air. “They move like mechanized doom,” Robert Jordan remarks of the airplanes in Ernest Hemingway’s novel For Whom the Bell Tolls (1940). The children drew the planes in remarkably accurate detail.

Many of the airplanes used by Franco’s forces to attack the civilian population were sent to Spain by Hitler’s Nazi Germany. These planes bore the insignia of the Nazi’s swastika on their wings. Rafael Barber, 10 years old, drew this picture of Nazi warplanes filling the sky. Their murderous geometry occupies nearly the entire drawing as the planes dwarf the town below. Their larger than life size, though unrealistic, rings true emotionally. The castle is useless to protect the village.

The drawing (at right) by ‘EG’ presents “before and after” scenes which should be read from bottom to top. The lower panel shows a train crossing a bridge; the sun peeks between two mountains. In the upper panel, the planes retreat after having destroyed the bridge and the train, upsetting the order and symmetry of “before.” Even one of the mountains has disappeared. The anonymous child artist seems to have intuited what Madison Avenue advertising agencies learned much later: that stories can be told with just the beginning and the end.  Alberto Monos at age seven has caught the details of the engines of war in this drawing of combat (at left) between airplanes and tanks. Note how the larger tank has doubled itself, with guns coming out of both sides of the two turrets.

The artists of the Children’s Colonies depict war in many different ways, but one rarely finds expressions of pure fantasy among them. That makes this drawing, by the 12-year-old Margarita Arnao Crespo, so unique. In the background, trees, clouds and mountains, the sun peeking through them; in the foreground, a central figure. Yet this is not a scene witnessed or remembered. Rendered in cheerful colors it is a fanciful allegory of the triumph over fascism. A boy, a smile creasing his face, swings his ax at a fantastic fascist beast. 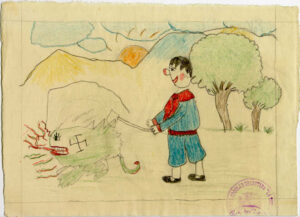