Children Draw Hope for the Future 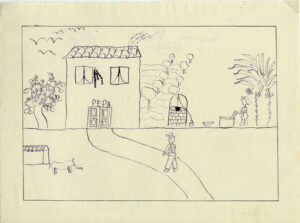 Born of the trauma of war many of these drawings reveal an understandable desire for a peaceful future. Carmen Sierra, age 12, drew an idyllic country scene. Smoke flows reassuringly from the chimney of a house, the name PEPA inscribed over the door. Birds, not bombers, fill the sky as trees recede in orderly rows behind the house. To the left a tree stands laden with fruit. To the right, a woman washes clothes under a palm tree. Whimsically, a dog quacks (“Cui”) at the mailman approaching with a letter in his hand. Everything is in its place.

Nine year old Emilio Di­az Luna depicts masons at work. “I will be a mason,” he affirms in strong lettering. A large crew of workmen erect a house, working in concert. After so many buildings in flames or rubble, he will build or rebuild, constructing the future.

“I would like to live in this peaceful farmhouse,” 9 year-old Carmen Huertas writes on her picture (below). The sun shines over a house with smoke flowing from the chimney. The flag of the Spanish Republic flies from the highest peak of the roof as farm animals graze in the yard. All is in order, with no sign of war. 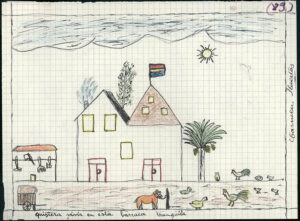 Despite these visions of peace Franco ruled Spain with an iron fist for the next 39 years. We have no way of knowing whether these children ever saw their dreams of the future fulfilled. Nevertheless, their drawings stand as testimony to the human spirit in the face of adversity.

At least three children who survived the war have seen their drawings after more than sixty years.