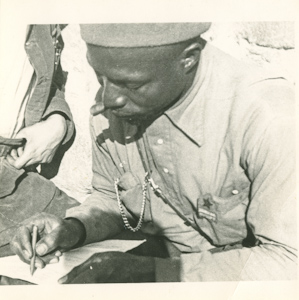 As we drove along, K. [accompanying soldier] got talking and told us the story of Oliver Law. It seems he was a Negro – about 33 – who was a former Army man from Chicago. He had risen to be a corporal in the U.S. Army. Quiet, dark brown, dignified, strongly built. All the men liked him. He began here as a corporal, soon rose to sergeant, lieutenant, captain and finally was commander of the Battalion – the Lincoln-Washington Battalion. K. said warmly that many officers and men here in Spain considered him the best battalion commander in Spain. The men all liked him, trusted him, respected him and served him with confidence and willingly.

K. tells of an incident when the battalion was visited by an old Colonel, Southern, of the U.S. Army. He said to Law – “Er, I see you are in a Captain’s uniform?” Law replied with dignity, “Yes, I am, because I am a Captain. In America, in your army, I could only rise as high as corporal, but here people feel differently about race and I can rise according to my worth, not according to my color!” Whereupon the Colonel hemmed and hawed and finally came out with: “I’m sure your people must be proud of you, my boy.” “Yes,” said Law. “I’m sure they are!”

K. says that Law rose from rank to rank on sheer merit. He kept up the morale of his men. He always had a big smile when they won their objectives and an encouraging smile when they lost. He never said very much.

Law led his men in charge after charge at Brunete, and was finally wounded seriously by a sniper. K. brought him in from the field and loaded him onto a stretcher when he found how seriously wounded he was. K. and another soldier were carrying him up the hill to the first aid camp.

On the way up the hill another sniper shot Law, on the stretcher; the sniper’s bullet landed in his groin and he began to lose blood rapidly. The did what they could to stop the blood, hurriedly putting down the stretcher. But in a few minutes the loss of blood was so great that Law died.