Images of Life Before the War

Among the most moving of the drawings are those that depict images of peace. The drawings in the first grouping –life before the war– vary considerably in topic and execution, but all have an orderly air about them, a sense of daily life as usual. They depict ordinary people –often featuring the artist as protagonist– doing ordinary things: a stroll in the park, returning from school, washing clothes, feeding the chickens. The children draw these scenes in loving detail. They evoke and idealize home, preserving on paper what they may never see again. Carmen Sierra, age 12, draws an urban park scene (at left). Well tended trees flank the path in two orderly rows. Carefully drafted park benches await passersby. A man and a woman walk from right to left. He holds what appears to be a loaf of bread in his left hand, she a purse. They are talking, perhaps arguing. In the lower right hand corner four tiny children play catch. Their rendering as stick figures without facial features stands in contrast to the adults, represented in realistic detail –cuffs and buttons, hair and faces, shoes and purse meticulously drawn. These are the stable features of the child’s world, they are what matter and merit attention.

In his drawing of Madrid before the war, Guillermo Garci­a Montano, 13 years old, shows people buying tickets to the monumental Cine Metropolitano movie house. Life proceeds as normal: a child holds its mother’s hand as they enter the theater; a passenger gets out of a taxi as a kid rolls a hoop down the sidewalk; a newsboy sells papers.

Faustina Guadano remembers her grandmother’s house from afar. She feeds a hen larger than herself as its chicks scurry around them. The disproportion, the error of realistic representation, reveals an emotional truth far greater than accuracy of scale could. 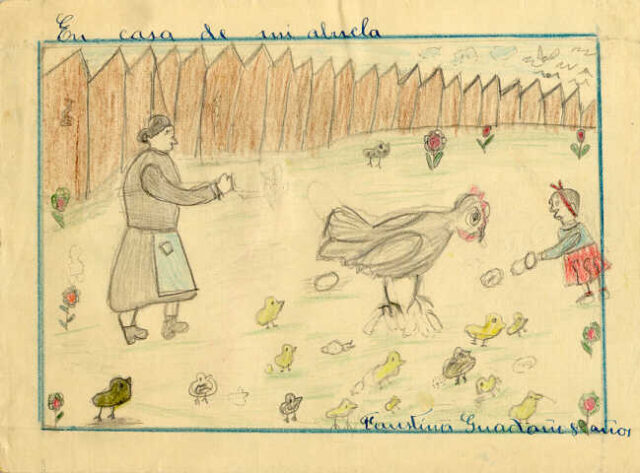 It is often difficult to determine whether these drawings represent life before or after the war. We can understand them simply as life without war. In either case, this is the world the child refugees only have access to in memory or imagination, images of peace fixed in color and shapes on paper.