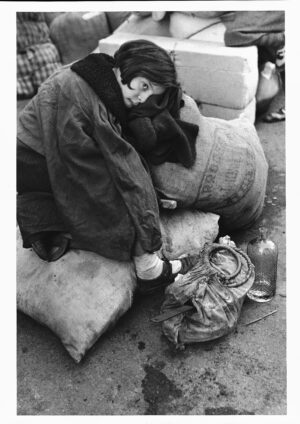 Following the fall of Barcelona in January 1939, a flood of desperate civilians including women and children flowed north towards France. Behind them came the retreating Republican Army covered by a rearguard composed of the Durruti Column and elements of the Army of the Ebro. Despite protests from the right wing press in France, the border was opened to admit them into France, where they were interned in concentration camps at Gurs, Argeles-sur-mer, Barcares and St. Cyprien. Conditions inside the camps were desperate, with shelter, supplies and medical care virtually non-existent. Strict military discipline prevailed, and those suspected to be Communists and Anarchists were taken to separate prison camps where they were held as prisoners under a regime of hard labor.

From April 1939 the Spanish Republican exiles were allowed option to leave the camps, provided they obtained work with local employers or enlisted in labour battalions, the Foreign Legion or the French Army. Around 15,000 joined the Foreign Legion, including the elements of the Durruti column who were offered a choice between this and forced repatriation.

Following the fall of France in 1940 over 220,000 Spaniards were engaged in forced labor for French and German enterprises in France.

In Resource Types: Lessons
In Resource Genres: Introduction to the Spanish Civil War