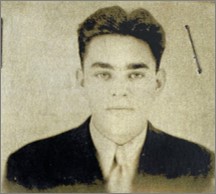 Eisenberg, Abraham Boris b. October 22, 1916, Brooklyn, New York; Father Isidor Eisenberg; b. May 1890, Russia; Single; Aspiring journalist and Teacher; CP; Received Passport# 353073 on November 18, 1936 which listed his address as 1646 Union Street, Brooklyn, New York; Sailed November 21, 1936 aboard the Rotterdam; Arrived in December 15, 1936; Served with the XV BDE, Lincoln Battalion, Jarama; Deserted February 28, 1937; Eisenberg left Valencia on March 11th, in company with Nathan Levin, in an attempt to reach French territory through Barcelona; Returned to the US on March 27, 1937 aboard the President Harding; Donald Boynton was also aboard the same ship; d. April 1981, Knoxville, Tennessee, buried in New Jewish Cemetery, Knoxville, Knox County, Tennessee. According to statements made at the American Consulate in Valencia on March 4, 1937:

Subject made a false statement of his age at Albacete when he filled out the “fiche,” stating that he was over 21 years of age. From Albacete subject went to a small town, about two or three hours away by bus, doesn’t know the name of it. Made several visits back to Albacete while he was there. Subject stayed at this town from three to four weeks (possibly this is Villarobledo). From there subject was sent to the front, thinks west of Toledo. He was up in the front lines but was relieved from front-line duty, since there was a possibility for him to go home on account of conditions at home. Before subject left for the front he made an application to be sent home. That was more than four weeks ago, and it is now at least nine days since subject was taken out of the front lines. On account of letters Received from home, and on account of the letter received from this Consulate, subject could stand it no longer, and on March 3 he left the front and came to Valencia, getting a lift on a truck. He had a pass with the stamp of the International Brigade on it. Subject wants to go back home, not on account of himself, but on account of his family.