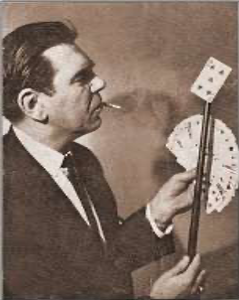 Al Stevenson was born September 1, 1916 in Chicago, Illinois. Naturally his first affiliation was with Chicago Assembly No.3; then with the Parent Assembly; and because he lives in Massapequa on Long Island, he cast his lot with Assembly No. 77. He is also a Past President of The Wizards' Club of Chicago, the Manipulators of Chicago, and of three hypnotic so-cieties. For the past four years he has been Associate Editor of "Hu-gard's Magic Monthly." His impetus in magic was at age eleven, receiving a free magic trick at a movie matinee about magicians. He says little of his early years, but he maintained and built up his mag-ical skills, and has a rather remark-able service record. He spent three years in the Lincoln Brigade during the Spanish Civil War. This included 17 months in a Fascist Concentra-tion Camp. He was a pilot for three months, and a machine gunner for 15 months, during which time he was shot down. Later he served three years in the U.S. Army and four years in the U.S. Air Force. He had various duties, and while with the Recruiting Service he used magic to get prospects in-terested. Then he was sent to Bolling Field, Washington – but by mistake he was classified as a "musician" and assigned to the Air Force Band. The mistake rectified, he went into Special Services, taught a class in magic, and did hospital and service club shows. He did shows in France, England, Ireland, Germany, Belgium, Holland, Japan, Spain and Scotland, which is covering considerable territory. One show was in a submarine at New Lon-don, Connecticut; and for contrast, another was for U.S.A.F. General Hovey while flying in a B-17 Bomber. He also became interested in Hypno-sis, and at one period was assigned to Camp Stoneman California Mili-tary Hospital as a Consultant Hypno-tist, working with combat fatigue and war-induced neurosis. Another interesting assignment was to the Counter Intelligence Corps at Camp Halobird, Maryland. He assumed nine different identities, birthdates, etc., acting as a "captured prisoner." The students would interrogate him, and their grades depended on the skill with which they extracted in-formation from him. A good chance for Al to improve his own science of misdirection! Since his service years, Al Steven-son has had an interesting career as a performer, teacher, author and magic dealer. During his stay in Cali-fornia he travelled with a carnival as a pitch-man, which is good train-ing for behind-the-counter selling. As a teacher he was founder of The Illinois Institute of Hypnotic Re-search and The California Society of Hypnotists. He learned the deaf-and--dumb sign language in order to teach magic to a deaf group in Michigan. He recalls that his favorite student was probably the biggest guy in the world -Henry Hite of the vaudeville act of Low, Hite & Stanley -seven feet nine inches tall! That chap could perform without a raised plat-form!

Al Stevenson is the author of "A Complete Course in Hypnosis." "75 Tricks with the Stripper Pack," "75 Tricks with the Svengali Deck," plus some fine routines for Sponge Balls and other items which he markets. In Hollywood he advertised his hyp-notic course in the local papers with rather unhappy results. It turns out the printed copy read, "A Complete Course in Happiness." He was a magic demonstrator in 13 magic shops; owner of two. One of his early jobs was in the Dell O'Dell Shop in Hollywood. While working in Boston he made a dollar-bill- ring for a slightly tipsy customer; but the bill used was $100. The cus-tomer thanked Al and left, but soon returned, cold-sober. A block from the shop he had been held up at the point of a gun, his near-empty wallet and watch taken -but the ring was not noticed. He gratefully tipped Al $20 from the rescued $100! For four and a half years Al Stev-enson was the owner of The Wizard's Shop in the New York Subway Times Square Station. This was an amazing hole-in-the-wall shop, located right in the heavy stream of traffic. People were always in a hurry, but AI, with his pitchman-acquired skill, could hold their interest and make sales. Among his regular customers was an armless man who loved magic. He bought the tricks, but had his wife learn to do them, and present them for their guests at their home. Al then became a partner in The Wizards' Work Shop of Massa-pequa, mail-order and wholesale dis-tributor of magical specialties. He makes remarkable sponge-balls and other compressible items. He likes to do table magic, some real sleight of hand and an apparent sleight routine by black art. Completely dedicated to magic, Al was a useful friend and in-structor in most branches of our art, and certainly a great asset to Assembly No. 77. Al passed away in on 2 January 1966 at his home in Massapequa at the age of 49. At the time of his death he was survived by his brother Norman, of Milford, CT, and several nieces.