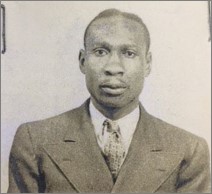 k- b. February 6, 1913, Montgomery, Alabama; African American; 9th grade education; Single; Laborer; CP 1936; received passport# 431965 on June 2, 1937 which listed his address as 817 Home Street, Bronx, New York (2333 E. 57th Street, Cleveland, Ohio); Sailed June 12, 1937 aboard the Georgic; Arrived in Spain on July 3, 1937; Served with the XV BDE, Mackenzie-Papineau Battalion, MG Co., WIA at Fuentes XV BDE, MG Co.; Killed in action January 1938 at Teruel. eteran of the unit recalled that Lewis:Like most fellows coming from a hospital he was poorly equipped for the bitter cold of Teruel. I gave him a burlap bag I had planned to wrap around my feet when I slept. Someone "organized" a blanket for him. We moved into the lines at Teruel after dark. I took the first watch on our heavy Maxim. The next morning, while I resteda mortar shell came down and demolished the Maxim. Lewis was killed instantly. ~ Chris Brooks

SACB, Cadre, Mac-Paps, Barney Baley to Brooks. Biography Charles Howard Lewis was born in Montgomery, Alabama, on February 6, 1913. He completed the ninth grade. When he volunteered to serve in the International Brigades, Lewis was living in Los Angeles where he worked as a laborer. He was a member of the Workers Alliance and had joined the Communist party in 1936. Lewis arrived in Spain on July 3, 1937. Assigned to the newly created Mackenzie-Papineau Battalion, Lewis participated in the unit's first action at Fuentes de Ebro. Wounded in action, Lewis was sent to Benicasim to recuperate. Following his discharge from the hospital, Lewis joined the Machine Gun Company of the XVth Brigade. Barney Baley, a v