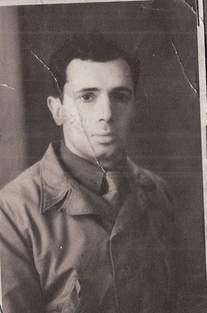 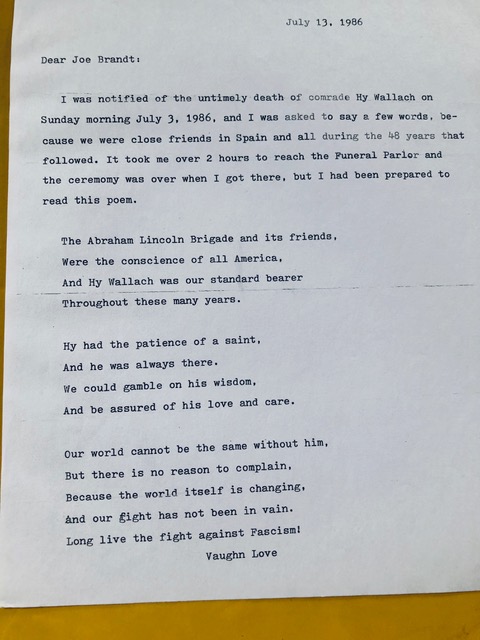 Manuscript Captured by the fascists behind enemy lines Gandesa, 1938 by Hy Wallach, undated 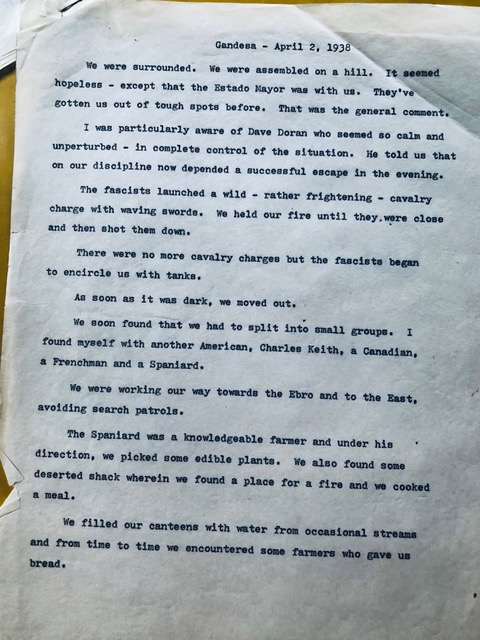 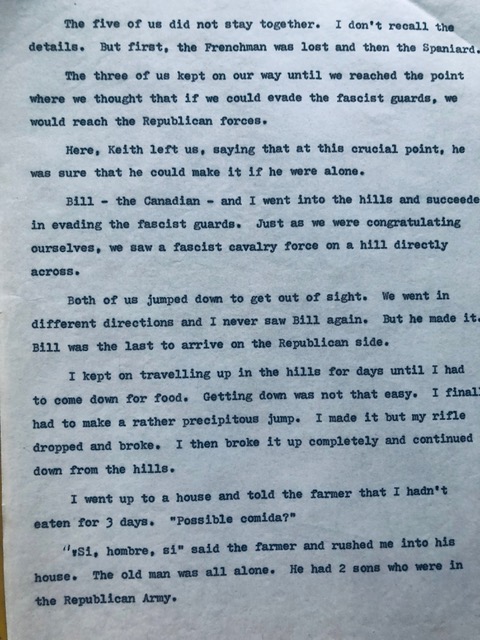 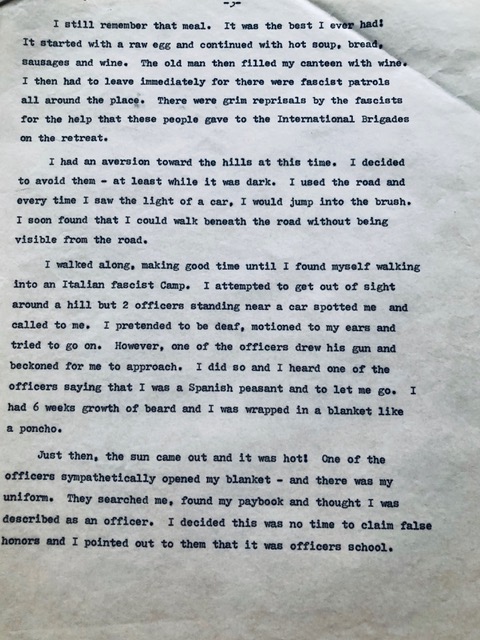 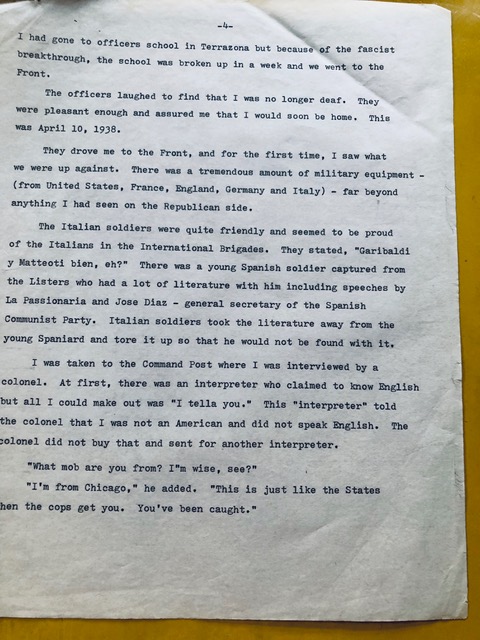 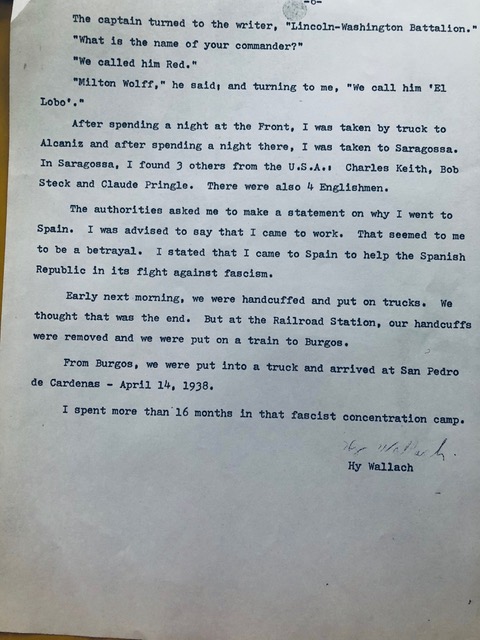 Release from San Pedro, We catch the last boat out of Le Havre on the eve of WW II; Letter to Carl Geiser from Hy Wallach, November 16, 1979 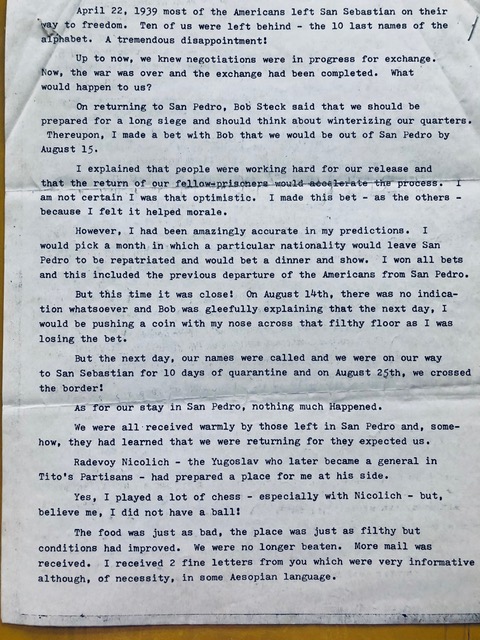 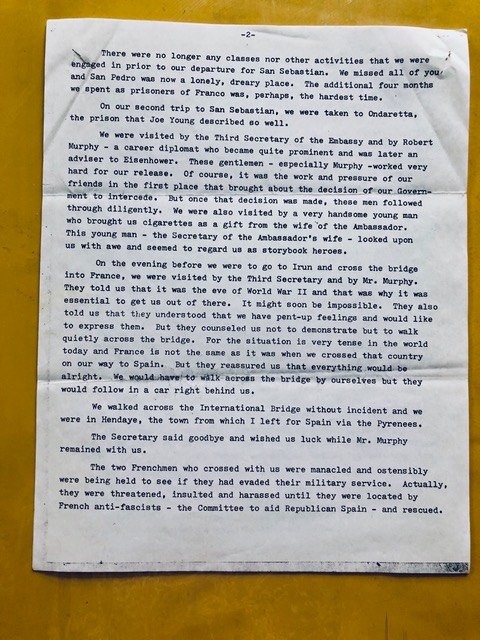 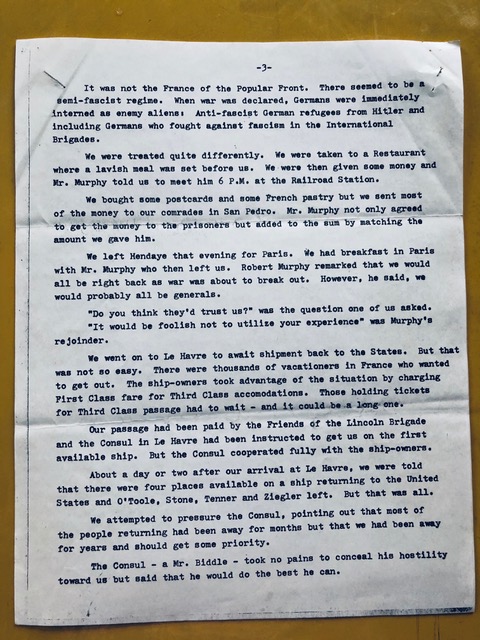 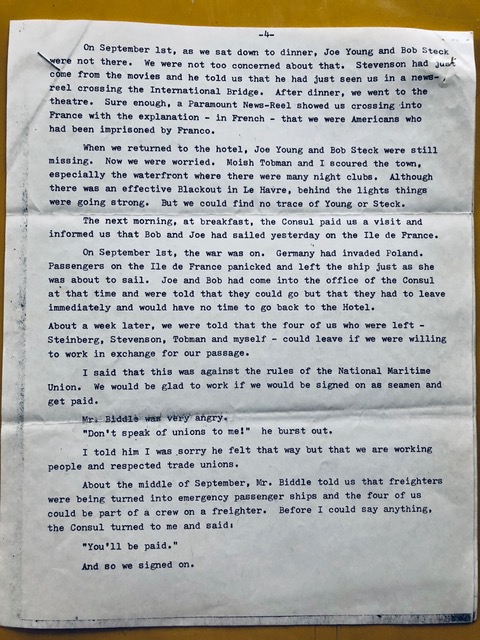 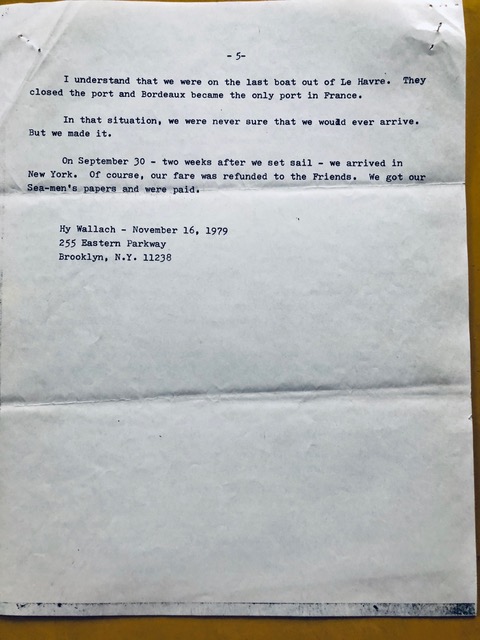 Tribute by Carl Geiser, 1978 Red Cross parcel post authorization from San Pedro/List of Americans in San Pedro and prisoners to exchange from Salamanaca, Spain records office, research by Nacho Garcia, Bilbao, Spain INTERROGATORIO DE HY WALLACH Campo de Concentración de San Pedro de Cardeña, 21 de abril de 1938 Autobiographical Entry At the age of 23, working as a shipping clerk in the garment industry and belonging to the Young Communist League, I volunteered to fight against fascism in Spain for the peoples of the world as well as for the United States. Stopping the advance against fascism was the most important task of the times. I fought in the battles of Brunete, Quinto and Belchite, Fuentes del Ebro and Teruel. I was selected to attend an Officer’s Training School but at the end of the first week, the entire school had to be sent to the front lines near Gandesa to stop the world’s first blitzkrieg, threatening to cut the Republic in two. In the battle of Gandesa – after 8 days behind the lines – I was captured by Italian fascist troops. I was imprisoned more than 17 months in San Pedro de Cardenas, a fascist concentration camp. The treatment was horrible. We not only stood up to it, but also developed a positive program. Many things were going on in San Pedro. We created a newspaper, “The Jaily News” edited by Sidney Rosenblatt and myself. I also helped to organize the “San Pedro University”, where we would get first-hand information on historical and contemporary events from our fellow prisoners, people involved in progressive and revolutionary movements all over the world. But chess was the principal activity at San Pedro. The remarkably skilled artisans and craftsmen among the prisoners carved pieces out of charred wood and stone. Chess served to take the prisoners’ minds off the hunger, cold, and beatings, which were especially frequent after there had been a successful Republican offensive. I wrote a chess column in “The Jaily News.” I also gave simultaneous exhibitions. I once played against 25 prisoners and did not lose a game. I have had some success in chess outside of Spain and have won many trophies, but I am proudest of having won the chess championship of San Pedro de Cardenas. I also became a “betting man” at San Pedro, because I felt it would help morale. I would pick a month in which a particular nationality would leave San Pedro to be repatriated and would bet a dinner and a show. If I lost I would have to push a coin with my nose along the filthy floors of our quarters. I explained that people were working hard for our release. I am not certain I was that optimistic, however I was amazingly accurate in my predictions. I won all bets and this included the previous departure of the majority of Americans from San Pedro. Although I never collected on the bets, nothing gave me greater satisfaction than seeing the hope inspired by winning these bets. I have served for many years on the National Board of the Veterans of the Abraham Lincoln Brigade and as Executive Secretary from 1975 – 1977. I was VALB Corresponding Secretary from 1977 - 1979. Before that, I was Treasurer of the VALB. In World War II, I served in the Army of the United States in North Africa, Sicily and Italy. I received three battle stars and a Presidential Citation. During WWII, I was in the Signal Corps, attached to the 15th Air Force. After the Battle of the Bulge, I volunteered for the Infantry and wound up with the Fifth Army. On VE Day, I had enough points to be discharged but I turned it down, volunteering for the Pacific. I went home on furlough and then to Fort Dix waiting to be shipped to the Pacific. VJ came while I was awaiting reassignment and I was immediately discharged. We did not defeat the fascists in Spain and succeed in stopping WWII. But the fascist timetable was upset. It was set back 2 years and 8 months – 2 years and 8 months in which millions of people all over the world were mobilized in the struggle against fascism. Our fight in Spain was a significant contribution to the victory over the fascists in WWII. The Abraham Lincoln Brigade has stood for the principles I feel so strongly about - the struggle against fascism, against war, against racism and against anti-Semitism. Photographs: Hy Wallach in WW II, and below Photograph of Hy Wallach on the picket line protesting Spain. 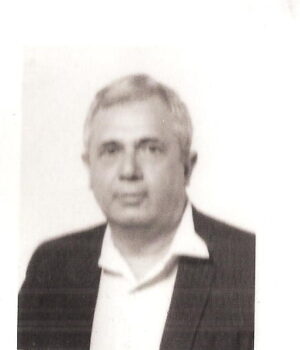 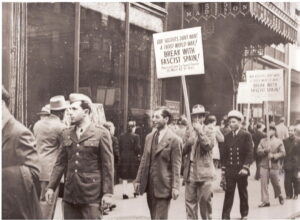