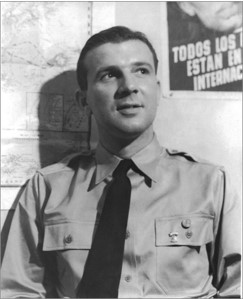 Father and Mother:  Lieb Avraham Romero (birth father, died when Ernest was 9 months old*); stepfather, Louis Juhaz married Ernest’s mother Theresa St. Andrassy prior to Ernest being born, to save face.  They were 2nd or 3rd cousins.  Both of his birth parents were anarchists. *Ernest discovered his birth father’s identity, name and that he’d passed away from mushroom poisoning, when Ernest found some of his birth father’s friends as a teenager.

After his mother, Theresa passed away from consumption (tuberculosis), his stepfather remarried.  I do not have the woman’s name, however, they had a daughter, Eva Juhaz and a son, Louis Juhaz.  Ernest considered Eva his sister, but the brother as a half-brother.  Ernest maintained a close relationship with Eva for many years.  His children, Dolores & Margo met her, her husband and 3 children, as well as visits to their home and weddings.

Once Louis passed away in 1914, his wife gave Ernest to his grandparents, the St. Andrassy’s.  He was 7 years old.  When he was 9 or 10 years of age, his grandparents put him in a Catholic orphanage.  He experienced multiple types of torture including beatings and mental persecution.  His grandparents told him and the priest he was a Jew bastard.  This refers to his birth father.  The priest questioned him continuously on having “bad” thoughts, especially sexual ones.  Ernest didn’t understand, being a young boy.  However, one night, he heard some noises and got up.  He went to see if there was anything wrong with the nun who slept behind a curtain in their dorm room.  He said she was “like their mother”.  What he saw, the priest on top of the nun, horrified him so much, he ran away soon after.

Unfortunately, he ran to his Uncle Charlie & Aunt Clemy Dolnic’s farm.  Although they loved Ernest, he was found there and returned to the orphanage.  He ran away again to their farm, and again was returned.  Each time, he was beaten by the priest.  The third time, he ran away, he went to the Mississippi River and became a cabin boy on a river boat.

Ernest had a 4th grade education.  He became fascinated by a road crew survey and asked if he could see the instrument they were using. This was the beginning of him educating himself to become a Mechanical Engineer.  He studied in the library every day when he wasn’t working.  Among the many jobs he did, was a hoofer (dancer) in vaudeville and a cougar bounty hunter.

Eventually, he moved to Chicago to work at Marshall Fields, teaching young women to gift wrap.  There, he met his future wife, Charlotte Braun (b: 2/22/1913 in Zhinkov Ukraine; immigrated to USA in November 1921) at a CP meeting through mutual friends.  He joined the Abraham Lincoln Brigade in Chicago, taking the oath of office in 1937.  A photograph of this event is shown.  He arrived in Spain on October 31, 1937 and fought until he was injured by a bomb, lost hearing in one ear, and partial in the other in 1938.  He was sent to a hospital in Marseilles to recover.  He returned home on July 22, 1938.

He and Charlotte were married by a rabbi on August 9, 1939, to satisfy her mother.  They were both CP members.  They had 2 daughters, Dolores Ruth Romero Wine (b. 10/26/1942) and Margo Lewis Romero Szermeta (b. 12/21/1945).  Charlotte worked as a secretary for JPI (Jewish People’s Institute) translating Hebrew into English and vise versa. She also worked as a secretary for the University of Chicago. Ernest worked as a mechanical engineer for many different firms, including Vern Alden, Harry O. Hefter and Bechtel.  He designed all the piping for the Kellogg’s Plant in Battle Creek, Michigan as well as the largest sulfuric acid plant in Canada.

He and his family were harassed by the FBI on more than one occasion between 1953 - 1955, they would come to the house and ask Charlotte and Ernest questions.  The FBI agents told them they were going to speak to their neighbors about any ‘unusual’ activity (i.e. meetings) at their home.  One visit in particular was when agents came to the door and Margo answered the door.  She was 7 years old.  The two men said they were insurance salesmen and asked to speak to her father.  Only, her father wasn’t home at the time.  Margo looked at their wing tip shoes and remembered her daddy telling her that FBI men always wore wing tip shoes.  She yelled at them for lying and both men were visibly angry and embarrassed.  They left, but not before threatening to arrest her.  She slammed the front door on them and never forgot the fear they had tried to instill in her young mind.

He was involved with the VALB throughout his life, going to meetings, always bringing the Spanish Civil War posters he had collected in Spain and bringing his family to these events.  The last chapter was in San Francisco as Treasurer of the Bay Area VALB Post.  He passed away from liver cancer on March 21, 1978. He is survived by his 2 daughters, 5 grandchildren and 15 great-grandchildren. 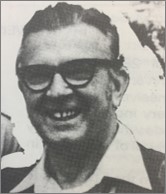