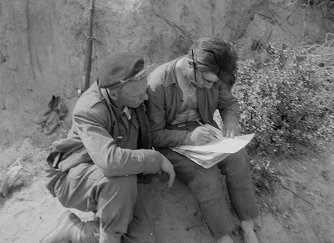 Kusmann, Felix (Kuzman; Kusman); b. March 26, 1909, Reval (Estonia), Russia; Estonian American; Married; Carpenter; CP 1933 party functionary; Domicile 242 E. 11th Street, NYC; Arrived in Spain in March 1937; Served with the XV BDE, Washington BN and Lincoln-Washington BN, Company 3, Adjutant Commander; Served at Quinto and Belchite (Medinana defense); Returned to the US as a stowaway on September 12, 1938 aboard the Normandie; Went to Cuba to await new entrance papers sailing on July 29, 1939 aboard the SS Oriente;  Later returned to the US; d. July 1983, West Shokan, Ulster, New York. Source: Repatriation List (7/8/1938, ll. 209); Cadre; RGASPI; ALBA 178 Felix Kusman Papers; ALBA PHOTO 178 Felix Kusman Photographs; Daily Worker, November 22, 1938, p.2; L-W Tree Ancestry. Biography: Felix Kusman (1909-1983) was born in Estonia in 1909. He lived in Brazil for a year before working for twelve years on board ships out of Brazil and Argentina. He moved to New York City in 1929 and worked as a seaman on U.S. ships until 1936. In 1936, he moved to France and soon traveled to Spain to fight as a volunteer in the Spanish Civil War. He served for two years in the George Washington Battalion, where he was a captain. He arrived back in New York as a stowaway on the S.S. Normandie in September 1938. In New York, he worked as a social worker for the North American Committee for Spanish Relief in 1941 and as a national organizer for the Joint Anti-Fascist Refugee Committee (JAFRC) from 1942-1949. He raised hundreds of thousands of dollars for the JAFRC and was a liaison for them with the embassies of many countries, doing work in arranging for Spanish and International Brigades exiles to live in Central and South America. In 1940, he registered for selective service in the United States Army, but never entered the military. His Freedom of Information Act (FOIA) file reveals that Kusman was under surveillance by the FBI from 1942-1963 because of his ties to the Communist Party and his work with the JAFRC. Never a U.S. citizen, he was detained on Ellis Island under the Walter-McCarran Act in 1954. His INS file (part of the FOIA file) includes information about his time in Spain. Kusman was active in the Veterans of the Abraham Lincoln Brigade. - Courtesy of Tamiment Library, NYU. Photograph: John Weldon, Lincoln-Washington Secretary and Felix Kuzman, Darmos, April 1938. The 15th International Brigade Photographic Unit Photograph Collection; ALBA Photo 11; ALBA Photo number 11-0352. Tamiment Library/Robert F. Wagner Labor Archives. Elmer Holmes Bobst Library, 70 Washington Square South, New York, NY 10012, New York University Libraries.
Birth Nation Estonia
Birth City (Overseas) Reval
Vocation 1 Carpenter
Party Affiliation CP