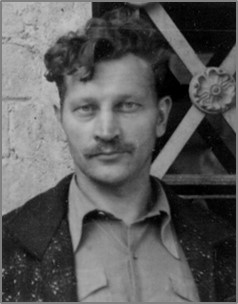 Arvola, “Frank” Ranse Edward (Arvola, Ranse Edward; Arvold); b. December 31, 1903, Victoria, Michigan; Finnish American; CoB; father Matti Autio-Arvola (1858-1925), mother Greta Johanna (Raudaskoski-to”lli) Arvola (1871-1911); Education through 8th Grade; No prior military experience; Single (Married and divorced?); Truck Driver and Lumber Worker; CP 1931, county chairman, Timber and Sawmill workers union local 15; Received Passport# 416149 (416159) on May 18, 1937 which listed his address as White Pine Mine, Michigan; Sailed May 20, 1937 aboard the Berengaria; Arrived in Spain on May 30, 1937 after surviving the sinking of the City of Barcelona; Entered the IB on June 2, 1937; Served with the XV BDE, Mackenzie-Papineau BN, MG Co., Driver and Cook; XV BDE Transport; Rank Cabo; Injured and was in the Base Hospital in Benicassim from August 27, 1937 to January 9, 1938; served at Brunete, Quinto, Teruel, Segura de los Baños, Retreats, and Ebro Offensive; Returned to the US on December 15, 1938 aboard the Paris; Married Mary Laine (1919-1995) on January 31, 1942 in Detroit, Michigan; Daughter Susan Marie Arvola (1945-1990); d. January 13, 1983, West Sacramento, California, buried at Woodlawn Cemetery, Ontonagon County, Michigan. Siblings: brothers Taneli Arvola (1892-1894), Vilhelm Arvola (1896-1959), Matti Arvola (1897-1959), Theodore “Ted” Arvola (1906-1967) and Arthur Gunnar Arvola (1909-1973), sister Iida Arvola (1894*1895), Hilja (Helia) Johanna Arvola (1899-19582), and Fanni Marie Arvola (1902-1990). Source: Sail; Scope of Soviet Activity; Cadre; Inventory North Americans; RGASPI Fond 545, Opis 6, Delo 858, ll. 58-67; Finnish; MPE; (obituary) The Volunteer, Volume 5, No. 2, p. 20; L-W Tree Ancestry; Find-a-Grave #44070171.  Code A Obituary: A Eulogy For Frank Arvola  Frank Arvola, dear comrade, born in Victoria, Michigan on December 31, 1903, died in Sacramento, California on January 13, 1983. In the late 1920’s and early 30’s Frank Arvola worked at various jobs. He was an outdoorsman and often earned a living as a trapper and hunter. He trapped beavers, hunted and did farm work. He and his brother acted as guides for hunters from Detroit and other southern Michigan cities. They had a hunting cabin in the back woods. Frank was an accomplished woodsman, hunter and fisherman with a wide knowledge of the outdoors. He worked in the lumber camps and was active in organizing the first union for lumberjacks - - the first union formed in upper Michigan, Wisconsin, and Minnesota. In the early thirties he was an active organizer in the Farm Workers Union and was instrumental in stopping farm foreclosures throughout the upper Peninsula. In Ontonogan County only two farms were foreclosed and up for sale – neither one was sold due to tremendous demonstrations by farmers and workers. Frank was directly involved and took a leading role in the activities. When the farm foreclosures were halted throughout the country, due to the militant action of the farmers, Frank then became involved in organizing the unemployed councils. At one demonstration Frank was manhandled and beaten by vigilantes but managed to escape without serious injury. He was active in the campaign against War and Fascism long before the majority of people recognized the dangers of Hitler, Mussolini, and Franco. He was active in distributing leaflets to the CCC (Civilian Conservation Corps) Camps which were operated and controlled by the army. At one camp a gang of young fellows, following orders of the camp commander, caught Frank as he distributed leaflets (outside of camp). He was forced to run the gauntlet (run between two rows of men and each man struck, kicked, or punched him). He was severely beaten - - broken ribs, bruises and broken nose. Being unemployed with no money, he had no means to pay for mending. His broken nose impaired his breathing for the rest of his life. He never complained about it. Nothing stopped him in his fight against war and Fascism. When work started in Detroit, he moved there to work and in 1937; he enlisted to fight with the Abraham Lincoln Brigade in Spain. He learned to cook in his hunting-guiding years and he was good at improvising and making out with whatever was available and could make a real meal with olive oil, flour, and a piece of meat. He hustled food from the countryside and kept his comrades fed as best he could. That’s how he became a cook with the Brigade. Frank is survived by his wife, Mary Laine Arvola, a daughter, Susan Arvola, a brother, Ted, a sister, Frances Huxley, and numerous nieces and nephews. ~ The Volunteer Photographs: Frank Arvola in Spain, RGASPI Fond 545, Opis 6, Delo 858; and Arvola, chief cook in Auto Park, Alcover, April 1938. The 15th International Brigade Photographic Unit Photograph Collection ; ALBA Photo 11; ALBA Photo number 11-1049. Tamiment Library/Robert F. Wagner Labor Archives. Elmer Holmes Bobst Library, 70 Washington Square South, New York, NY 10012, New York University Libraries. 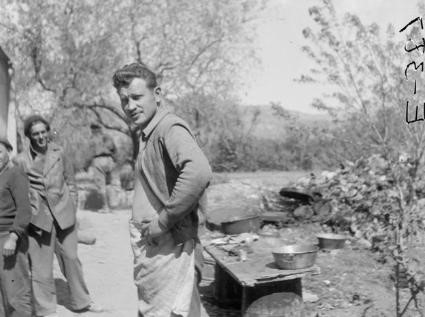