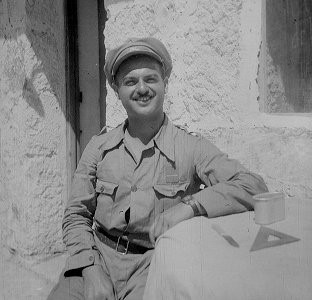 George Kaye (1918?-1990), who joined the Young Communist League in 1933, was one of the youngest American volunteers in Spain. Bill Bailey “adopted” young Kaye into the seamen’s machine-gun company, and Kaye, who had two years of college, served as editor for Bailey’s dispatches from the war. Prior to embarking for Spain, Kaye, a native New Yorker, worked as a truck driver for a furniture company in Hollywood, California and was a member of the Teamsters union. Kaye’s parents, Anna and Morris, were communist sympathizers. – Biography courtesy of Tamiment Library, NYU. The Marjorie Polon papers which include letters from George Kaye.