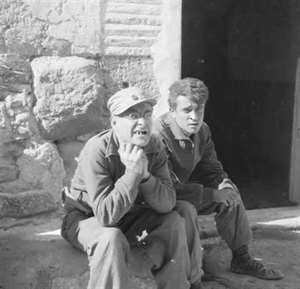 After a childhood in the Hebrew National Orphan Home and a youth spent as a labor activist and merchant marine, Harry Fisher volunteered to fight fascism in Spain as a member of the Abraham Lincoln Brigade. He later served as a B-26 bomber turret gunner in WWII. Married to Ruth Goldstein in 1939, they worked together for nearly 50 years at the Soviet News Agency, TASS, he in telecommunications, she as a research librarian and office manager. They shared an office, a daily walk to work, and a passion for life. They dedicated their lives to each other, their children and grandchildren, and to making the world a better place. Ruth died in 1993 after convincing Harry to write a book about his extraordinary experiences in the Spanish Civil War and helping get the project started. Published in 1998, his memoir Comrades led to speaking tours in the U.S., as well as Spain and Germany in response to great interest prompted by Spanish and German editions of the book. Just a week before his death, Harry finished the manuscript for his second book, Legacy. Negotiations are under way for the U.S. edition. He is survived by his son and daughter and their families, including three grandchildren, and a still-growing number of fellow activists and loving comrades. After collapsing at the antiwar demonstration Saturday, he was taken to St. Vincent's Hospital, where he briefly regained consciousness and recalled being in the same hospital 70 years earlier to receive stitches after being beaten by police on a union picket line. Harry was truly an inspiration to everyone he met. He will be sorely missed by his family and the incredible number of people he touched in his short 92 years. Harry Fisher, 92, soldier, pacifist, writer, and lifelong activist, died Saturday, March 22, 2003 after participating in an antiwar demonstration in New York City.- Submitted by Fraser Ottanelli