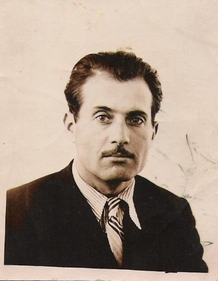 Arnaoutis, Heraklis (ΠΡΩΤΑΓΟΡΑΣ, ΠΕΤΡΟΣ; Arnaoutis, Petro (Peter) Protagoras; Amaoutis, Hercules M.); b. November 20, 1907, (September 18, 1904); Kitta Laconia, Greece; Emigrated to Belguim in 1932 for 6 months then to the US; Greek American; father Michail Arnaoutis, mother Trianfafilia Arnaoutis; 10 years Primary School education; Prior military service in the Greek Navy 1926-1927, total 14 months; Single; Radio operator (in Greece), Food Worker and employee of the Greek newspaper Empros; CP November 1934 (1935), Food Workers Union (FWU) AFL, Spartucus Club; Domicile NYC; Sailed June 12, 1937 aboard the Georgic; Arrived in Spain on July 6, 1937; Served with the XIII (or XI) BDE, Diacovitch BN; Later to XV BDE, Mackenzie-Papineau BN in training; Lincoln-Washington BN, Squad (Peleton) Leader in 2nd Company, WIA, struck in head by bullet; During Ebro Offensive he was with the Lincoln-Washington Estado Mayor; Also worked in the Transmisiones and Anti-gas schools at Castillo de Pozo Rubio; Rank Sargento; Returned to the US on September 20, 1938 aboard the Vito; WWII: US Navy, 1943-45; daughter Dolores Protagoras; d. November 2, 1970, NYC; was a member of the Spartacus of New York. Biography: Heraklis Arnaoutis was born on September 18, 1904 in Kitta, Greece. After graduating from Radio-telegraphists' School in Pireus, he served in the Greek merchant marine and was active in the radio-telegraphists' union. During the Metaxas dictatorship which commenced in 1936, his life was threatened and he illegally entered the United States. He then volunteered for the Lincoln Brigade and departed for Spain as a stowaway. In Spain, he served as a political commissar and fought in the battles of Jarama and the Ebro, among others. He sustained a head wound and thereafter suffered from the effects of embedded shrapnel. At the end of the Civil War he was detained in a camp in Le Havre, France. After returning to the United States he voluntarily enrolled in the US Navy and served from March 18, 1943 to July 25, 1945. Thereafter, he served on the board of the eastern United States coast branch of the militant, Communist-led O.E.N.O. (Federation of Greek Seamens' Organizations). O.E.N.O. organized many strikes and actions which led to the improvement of the deplorable work conditions aboard Greek merchant ships as well as becoming the target of arrests by U.S. police and attacks from shipowners' henchmen. For these activities, he received, in absentia, a death sentence from the Greek government, was deprived of Greek citizenship, and banned from Greek ships. He consequently adopted the name of Protagoras, to protect his relatives in Greece who were regularly harassed by the police because of his activities. He was an active member of the Greek workers' organization Spartakus in New York and served on the editorial board of its publication Empros (Forward). His wife Sophie, a Communist Party USA member, was unwaveringly supportive, assuming the main burden of family responsibilities. Because of harassment during the McCarthy era, the family moved to Poland in 1953 and remained there till 1967. Upon returning to New York he was active in the "Committee for Freedom and Democracy in Greece" during the reign of the junta (1967-1974). He died on November 2, 1970. -Biography submitted by daughter Dolores Protagoras. Source: Cadre; Inventory North Americans; Mac-Paps; Pay; Greek; RGASPI Fond 545, Opis 6, Delo 413, ll. 31-40; RGASPI Fond 545, Opis 6, Delo 541; Opis 6, Delo 858, ll. 48 (ver griegos); D. Paleologopoulos Greek Antifascist Volunteers in the Spanish Civil War (1936-39), Athens 1986; Steve Tsermegas and L. Tsirmirakes, No Pasaran. Greek Antifascist Volunteers in Spain, Athens 1987; VALB Memorial Tribute, December 6, 1970. Photographs: Heraklis Arnaoutis courtesy family, and below in Spain, RGASPI Fond 545, Opis 6, Delo 413. 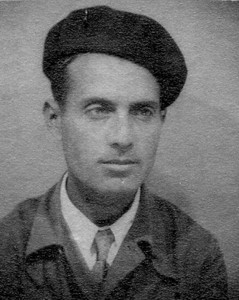