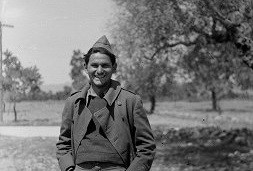 (“Gabby”; Rosenstein, Hyman [birth name]); b. February 6, 1916, Brooklyn, New York; Attended New York University for 1 year; Single; Bookkeeper, Salesman and Stenographer; CP April 27, 1936, YCL 1936 and American Labor Party 1937; Received Passport# 423019 on May 24, 1937 which listed his address as 1347 Bristow Street, Bronx, New York (1501 Broadway, NYC); Sailed May 29, 1937 aboard the Britannic; Arrived in Spain via Massanet on June 13, 1937; Served with the  XV BDE, Mackenzie-Papineau BN in training; Lincoln-Washington BN, Co. 1 at Quinto and Belchite; Lincoln-Washington, Estato Mayor; Served at Quinto and Belchite; Last unit Lincoln-Washington BN, Co. 3; Rank Soldado; Returned to the US on December 20, 1938 aboard the Ausonia; WWII Armed forces;  d. April 8, 1996. Source: Sail; Scope of Soviet Activity; Cadre; Figueres List; Mac-Paps; Pay; RGASPI (and under Rosenstein); ALBA 129 Herman Rosenstein Papers; ALBA PHOTO 129 Herman Rosenstein Photographs; Harriman.  Code A Biography: Herman Rosenstein was born in 1915, son of a garment worker and the youngest of five children. During the Depression Rosenstein worked as a bookkeeper for the William Morris Agency in New York City. He came into political awareness at a time when the threat of Nazism was making itself felt even in his Jewish neighborhood in the borough of Queens, New York. But when Rosenstein declared that he was going to Spain to join the antifascists in the International Brigades, his mother tried to prevent him from going by taking away his passport. Rosenstein soon procured another one, using his mother’s maiden name, Klein, and sailed for Spain in June 1937. Going by the name Herman “Gabby” Klein throughout his time in Spain, Rosenstein fought at first with the Canadian Mackenzie-Papineau Battalion, and later transferred to the Lincoln-Washington Battalion. He saw heavy action, distinguishing himself in battle, and was promoted to sergeant. Rosenstein remained in Spain until the International Brigades were evacuated from the country in the winter of 1938. During World War II Rosenstein was a first-aid worker, seeing action in the Pacific and in Europe. After the war, he worked as an auto mechanic, an electrician, a warrant officer, and later on the Housing Commission in Santa Monica, California. Rosenstein was a community activist and member of the California Democratic Council. He participated in Vietnam anti-war marches and supported numerous other political causes. He remained involved with the Veterans of the Abraham Lincoln Brigade (VALB) throughout his life, in 1986 traveling to Nicaragua with other veterans in support of the new Sandinista government. Rosenstein married his wife, Mildred, in 1941. They had a son, Paul, who became mayor of Santa Monica; and a daughter, Frances. - Courtesy of Tamiment Library, NYU. Photograph: Herman “Gabby” Klein, oficina, April 1938. The 15th International Brigade Photographic Unit Photograph Collection; ALBA Photo 11; ALBA Photo number 11-0131. Tamiment Library/Robert F. Wagner Labor Archives. Elmer Holmes Bobst Library, 70 Washington Square South, New York, NY 10012, New York University Libraries.