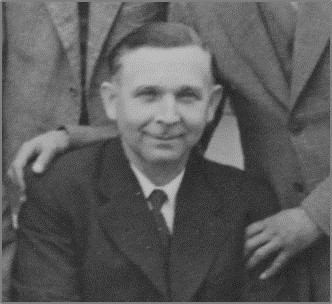 Kolping, Hugo b. September 23, 1896, Germany; German American; Elementary education; Machinist and Seaman; Non-Party, Socialist Party in Germany; Domicile Jersey City, New Jersey; Sailed July 21, 1937 aboard the Berengaria; Arrived in Spain on August 5, 1937; Served with the XV BDE, Lincoln-Washington BN; Rank Soldado; Noted as a bad element and drunkard; In January 1938 was in Tarazona; Reported Missing in action during the Retreats with note, "visto territorio leal en 5-4-38"; Returned to the US as a stowaway on August 4, 1938 aboard the Manhattan; On October 28, 1938 he was stamped as being a US citizen and released on the bond of the “Friends of the Foreign Born” in New York City; He voluntarily left the US on February 22, 1939 aboard the SS Oriente. Source: BN 58 Retreats; RGASPI Fond 545, Opis 6, Delo 849, ll. 7, Special List for Personnel Service, Demoralized Elements, January 16, 1938; Ancestry L-W Tree. Photographs: Hugo Kolping, from a group photograph taken aboard the Manhattan, and Seaman’s Protection Certificate application 1929, Ancestry L-W Tree.