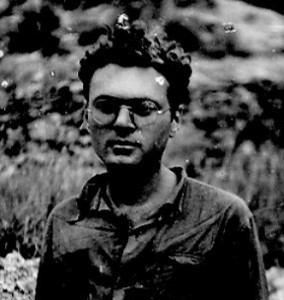 Weissman, Irving b. July 31, 1910 NYC; Jewish; Attended City College of New York for 1 year; Single; Student, Factory Worker, and WPA Teacher; CP July 1935 (1936) and YCL; Received Passport#396629 on April 23, 1937 which listed his address as 63 West 104th Street, New York New York, and his parent’s home 1922 Orontona Parkway, Milwaukee, Wisconsin (1183 Girard Avenue, Brown, New York); Sailed May 8, 1937 aboard the American Importer; Arrived in Spain via Llansa on May 29, 1937; Served with the XV BDE, Mackenzie-Papineau BN; Delegation of I. B. to Barcelona; XV BDE, Staff; Last unit Mackenzie-Papineau BN; Rank Sargento; Served at Fuentes de Ebro and the Ebro Offensive; Returned to the US December 15, 1938 aboard the Paris; WWII US Army, Anti-Aircraft, North Africa, Italy-Salerno and Anzio, Northern Europe, St. Tropez landings; d. December 20, 1998, San Francisco, California. Sources: Sail; Scope of Soviet Activity; Cadre; Figueres List; Mac-Pap; Pay; RGASPI; ALBA 165 Irving Weissman Papers; ALBA PHOTO 165 Irving Weissman Photograph; (obituary) Abe Osheroff, “Irving Weissman,” The Volunteer, Volume 21, No. 1, Winter 1998-99, pp.19-20; (obituary) Stephen Schwartz, "Irving Weissman" San Francisco Chronicle, December 23, 1998. Code A Biography: Irving Weissman (1913-1998) grew up in a Polish-Jewish immigrant family in New York City. In the early 1930s Weissman attended City College of New York for one year studying English literature and history. He quit school to work in a factory and help support his family. Weissman was a member of the Young Communist League and was active in the Fur and Leather Workers and the United Electrical Workers Unions. He participated in actions of unemployed and laid-off workers during the Depression. Weissman eventually got a Works Progress Administration (WPA) job teaching English to recent immigrants. He left this job to go to fight in the Spanish Civil War in 1937. Weissman departed for Spain on the SS American Importer on May 8, 1937. In Spain, he trained with the MacKenzie-Papineau Battalion and went into action with that Battalion on the Aragon front and at Fuentes de Ebro in September and October 1937. Weissman fell ill at the end of October and was sent to Barcelona with a delegation of the 15th International Brigade where he performed guard duties while he recovered. He rejoined the MacKenzie-Papineau Battalion in December 1937. Weissman left Spain on December 15, 1938. Upon his return to the United States Weissman worked as a ship's fitter in Hoboken, New Jersey. He was a member of the Industrial Union of Marine and Shipbuilding Workers of America, Local 15 and was elected to the Union's grievance committee. Weissman served in the United States Army from 1942 to 1945. During World War II he fought in campaigns in North Africa, Italy, France, Belgium, and Germany. When he returned to the United States he accepted an assignment from the Communist Party--of which he was then a member--to be an organizer, first in western New York State, then in West Virginia. In 1951, Weissman was arrested along with five other veterans of the Abraham Lincoln Brigade and Communist Party members and charged, under the Smith Act, with conspiring to advocate the overthrow of the United States government. Weissman was sentenced to five years in prison but the case was appealed. In 1956 the Supreme Court ruled that the case be retried and the new prosecutor's motion to dismiss the case was granted. In the intervening years Weissman had spent several months in jail while bail was raised and had served time for contempt of court for refusing to give names of Communist Party members on the witness stand. In the late 1950s Weissman left the Communist Party. Weissman worked in building construction in New York from 1953 until his retirement in 1978. Throughout this time and for the rest of his life he was active in neighborhood politics and with the Veterans of the Abraham Lincoln Brigade (VALB). Weissman headed a campaign to secure pension rights for Polish-Jewish veterans of the Botwin Company, some of whom were charging the Polish authorities with anti-Semitism. He was also editor of The Volunteer for several years during the 1980s. When his wife Freda died in the early 1990s Weissman moved from New York to San Francisco to be near his daughters and grandchildren. He remained active with VALB on the west coast, helping to raise funds for a monument in Seattle. Irving Weissman died of congestive heart failure on December 20, 1998. - Courtesy of Tamiment Library, NYU. Photograph: Irving Weissman in Spain, RA Fond 545, Opis 6, Delo 1010.
Birth City New York City
State New York
Education College/University 1 City College of New York
Ship American Importer
Vocation 1 Student
Vocation 2 Factory Worker
Vocation 3 WPA Teacher
Party Affiliation CP
WW II Service US Army