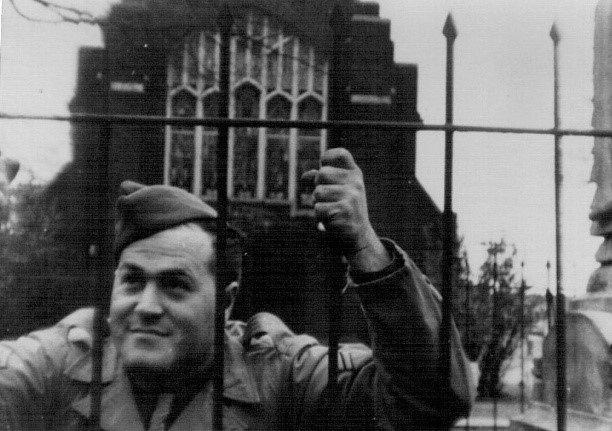 (“Toots”); Jewish; b. January 23, 1915, NYC; Single; Organizer Department Store Workers Employee’s Union; YCL 1932; Received Passport# 384046 on April 8, 1937 which listed his address as 268 & ½ Kosciusko Street, Brooklyn, New York; 24 years old; Sailed April 21, 1937 aboard the Queen Mary; Arrived in Spain on May 22, 1937; Served with the XV BDE, Washington BN, Co. 1, Section 2;  WIA July 9, 1937 Brunete; After an extended recovery became a Truck Driver; Returned to the US on April 1, 1938 aboard the Washington; WWII US Army, later with the OSS; d. November 3, 1967, NYC; buried in Long Island National Cemetery. Sources: Sail; Scope of Soviet Activity; Cadre; Washington; Repatriation List (2/26/1938, ll. 122); RGASPI; ALBA 250 Irving Fajans Papers; L-W Tree Ancestry; Find-a-Grave# 2668138. Code A Biography: Fajans was born into a working-class family in Brooklyn, N.Y. In 1932, he joined the Young Communist League. About that time he took a job as a stock clerk at the Macy’s department store in Manhattan. Fajans soon became an organizer for the Department Store Employees Union, where he served as a shop steward and strike leader in the campaign to organize New York’s retail workers. He describes this experience in an unpublished autobiographical novel that is part of the Fajans collection. Like many other YCLers, Fajans was recruited for the Lincoln Brigade and set sail for Spain in 1937. He served on the front lines at Jarama and Brunete, where he was severely wounded. After he recovered, he returned home in 1938 and resumed union and political work. When Pearl Harbor was attacked, Fajans volunteered for the U.S. Army. He moved quickly from basic training to officer candidate school at Camp Benning, Georgia, where he was at the top of his class. Just before graduation he was abruptly assigned to laundry work when military intelligence labeled him as a possible security threat because of his Spanish Civil War service. Some of his letters on the subject of political discrimination in the army appear in the new book, The Good Fight Continues; others remain in manuscript as part of the ALBA collection. In 1942, Fajans volunteered for the infantry and was wounded in the landing at Anzio (Italy). While in a hospital recovering from his wounds, Fajanswas visited by Lincoln vet Irving Goff, who was working nearby for the Office of Strategic Services (OSS). The two arranged for Fajans to transfer into the OSS, where he joined Goff, Vincent Lossowski, and Milton Wolff building ties with the Italian partisan movement. Fajans returns to New York City after World War II. After the war, Fajans served as executive secretary of the Veterans of the Abraham Lincoln Brigade. He was instrumental in producing a facsimile edition of The Volunteer for Liberty, the brigade’s wartime newspaper. He also acted as editor of a literary anthology about the Spanish Civil War titled The Heart of Spain. But when Communist Party leaders persuaded the vets to expunge Ernest Hemingway’s homage “To the American Dead in Spain,” because the celebrated novelist had criticized party leaders, Fajans refused to go along and resigned from the VALB. Fajans then built a new career in film making. Having used the GI Bill to learn film editing, he joined with a group of other blacklisted filmmakers on the production team of Salt of the Earth, a revolutionary and critically acclaimed documentary film about a Zinc miners’ strike in New Mexico. The film, released in 1953, was sponsored by the International Union of Mine, Mill, and Smelter Workers, one of the unions that had been expelled from the CIO for alleged Communist-dominated leadership. Salt of the Earth, which depicts the struggles of miners’ wives for recognition, dignity, and equality, is now viewed as a major landmark in documentary filmmaking. By the early 1960s Fajans, like many of the blacklisted filmmakers, began to find work as a free-lancer. During these years he also taught filmmaking in the School of Visual Arts in New York City. He died prematurely in 1968 at the age of 52 of a heart attack, at a time when his filmmaking talent was being recognized. ~Mike Nash, The Volunteer, December 2006. Photograph: Irving Fajans in WWII. Photograph courtesy of Harry Fisher.