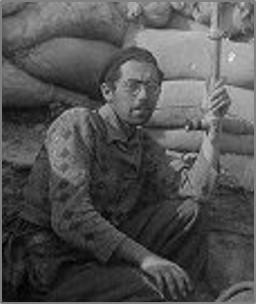 k-Freeman, Jack b. January 1918, Detroit, Michigan; Jewish; CoB; Graduated from Boy’s High School, Brooklyn, New York and attended the City College of New York for 2 years where he was the editor of the school paper; Single; Student and part time Clerk in a union office; YCL 1935 (1932; 1936) and CP 1937; Received Passport# 376532 on March 19, 1937 which listed his address as 906 Dekalb Avenue, Brooklyn, New York; Sailed May 1, 1937 aboard the Britannic; Arrived in Spain on May 30, 1937; Survived the sinking of the City of Barcelona; Served with the XV BDE, Observer on the Brigade Staff; Last unit Lincoln-Washington BN, Plaza Mayor; Rank Sargento; Killed in action September 7, 1938, Sierra Caballs, Ebro Offensive. Sources: Scope of Soviet Activity; Cadre; Pay; RGASPI (photo only); USSDA (under Freeman, Jacob) 2:0555, 54:0478; ALBA 227 Jacob Freeman Papers; Abe Smorodin, “The Boys of Williamsburg,” The Volunteer, Volume 22, No. 2, Spring 2000, pp. 6-7.   Code A Biography: Jacob Freeman (nicknamed Jack) was born in 1918 and grew up in New York City. His parents were active in left-wing politics; his father, Samuel, was Secretary-Treasurer of the Brotherhood of Painters, Decorators, and Paperhangers of America. Jacob Freeman left City College in February 1937. That May, he sailed for Europe to join the International Brigades in the Spanish Civil War. Freeman ran into trouble even before arriving in Spain when the ship transporting him from France, the City of Barcelona, was torpedoed and sunk by an Italian submarine. Freeman escaped unharmed. ("If they didn't get me with a torpedo they'll never get me," he wrote home.) He underwent training as an "observer," map-maker and scout; then, because of his age, he was for a time assigned to work as a translator at International Brigades headquarters rather than going into battle. However, he soon got his wish and was sent to the front lines. In the winter of 1937, Freeman contracted jaundice and pneumonia and was in and out of the hospital through the first few months of 1938. Back at the front, he was appointed group leader, overseeing a company of observers, and rose to the rank of sergeant during the Ebro campaign. In August 1938 Freeman was wounded in the head by shrapnel during an artillery bombardment. In September, he was killed in action at Sierra Cabals. Samuel Freeman, who had supported his son's commitment to the Republican cause, worked in New York to raise money for the Friends of the Abraham Lincoln Brigade (FALB) while Jacob was in Spain. After Jacob's letters abruptly stopped, Samuel tried assiduously for several months to obtain information about his son.- Courtesy of Tamiment Library, NYU. Photograph: Observers Jack Freeman and Peter Ambrosiac, Lincoln-Washington, Fuentes de Ebro, October 1937. The 15th International Brigade Photographic Unit Photograph Collection ; ALBA Photo 11; ALBA Photo number 11-0586. Tamiment Library/Robert F. Wagner Labor Archives. Elmer Holmes Bobst Library, 70 Washington Square South, New York, NY 10012, New York University Libraries. 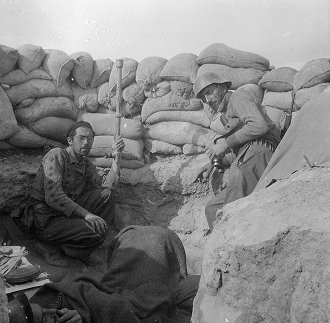