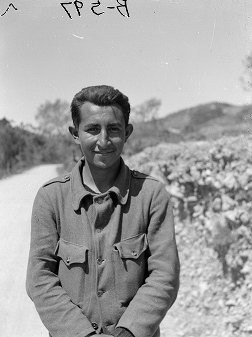 b. August 24, 1916, Odessa, Ukraine, Russia, Russian/Ukrainian American, Jewish, Graduated from the University of Chicago in 1936, Married, Archeology Student, YCL 1933, branch president (No party affiliation); Domicile 3802 N. Kenneth Street, Chicago, Illinois, Sailed February 20, 1937 aboard the Ile de France, Served with the International Brigade's apparatus in Perpignon, France, He assisted in the smuggling of volunteers into Spain, Entered Spain in April 1937, Estado Mayor of the IB in Albacete as a clerk, interpreter and aide to Bill Lawrence, Will Paynter, Wally Tapsell and Bob Kerr, later Worked with a Bulgarian Cadre Officer, finally in the XV BDE, Lincoln-Washington BN, Co. 3, rank Cabo, WIA July 28, 1938 Ebro Offensive; after recovery through February 1939 Estado Mayor, Honorable Discharge from the Republican Army, Spent time in Argeles sur-mer concentration camp in France, when freed went to Le Havre, Returned to the US in June 1939, WWII Civilian, rejected on three occasions by selective service due to wounds suffered in Spain, d. October 16, 2006, Ithaca, New York. Sources: Cadre, Pay, RA, ALBA 078 John V. Murra Papers [no relevance to the SCW]. h in Peru. In 1968 John Murra joined the faculty at Cornell University, where he continued to study Andean societies. The innovation at Cornell of which he was most proud was a course on the history of U.S. anthropology as an institution and a craft, rather than as a survey of ethnological theory. Not known for his patience with anyone he saw as naïve, facile, or selfish, Murra nevertheless could be quite generous, and is he remembered warmly by many former students and colleagues. After he retired in 1982, Murra remained active in international professional societies. He served as President of the American Society for Ethnohistory (1970-71), the American Ethnological Society (1972-73), and the Institute for Andean Research (1977- 83). In 1969 he gave the Lewis Henry Morgan Lecture, “Reciprocity andRedistribution in Andean Civilizations.” Murra was married and divorced twice, leaving no children. His papersare available to researchers at the National Anthropological Archives. Murra’s legacy will be found in manyfields, in many individuals, in the Andes, the United States, and elsewhere. - Frederic W. Gleach, Department of Anthropology, Cornell University

John Murra, Lincoln-Washington, May 1938. The 15th International Brigade Photographic Unit Photograph Collection; ALBA Photo 11; ALBA Photo number 11-0221. Tamiment Library/Robert F. Wagner Labor Archives. Elmer Holmes Bobst Library, 70 Washington Square South, New York, NY 10012, New York University Libraries. John V. Murra died in his home on October 16, 2006, at the age of 90. He was noted for his contributions in historical anthropology and particularly in Andean studies. His loss will be felt in a wide range of communities. Born Isak Lipschitz in 1916 in Odessa, Ukraine, Murra grew up in Bucharest, Romania. Expelled from his last year at the lycée for belonging to the Social Democratic youth, he eventually received his federal baccalauréatas a privately prepared student. He worked in paper factories in Romania and in Croatia. He also had several short stays in jail in 1933- 34, once as the only “red” in a group of Iron Guardists, which he survived in part through his knowledge of soccer. Murra’s fluency in many languages later resulted in his appointment to the headquarters staff of the International Brigades in Spain. Murra enrolled at the University of Chicago in 1934 and gravitated to the social sciences, where he found particular interest in anthropology. He graduated in 1936. But as he recalled later, “nothing in academic life compared with the urgencies of politics.” That fall, Murra went to fight in the Spanish Civil War. He later said, “I did not graduate from the University of Chicago. I graduated from the Spanish Civil War.” After the war he was interned in camps in France. He was divorced from his first wife during the war, dissolving his formal connection to the United States, and leaving him something of a man without a country. Finally able to return to Chicago in 1939, Murra—who began to use that name around this time—completed his Master’s degree in 1942. During 1942-43, Murra worked with John Dollard and Ruth Benedict interviewing Abraham Lincoln Brigade veterans for a project involving soldiers’ reactions to battlefield conditions. The results were published in 1943 under the title Fear in Battle. In 1946 Murra was turned down for U.S. citizenship on the ground that he had fought with the Spanish Republican Army. This cost him a grant that would have funded his dissertation research in Ecuador. He was eventually granted citizenship in 1950, after a lawsuit, but he did not receive a passport until 1956. Denied the possibility of travel to South America, he ultimately chose to write a dissertation that did not involve fieldwork. He defended his dissertation, The Economic Organization of the Inca State, in 1955. During this period, he taught at several universities, including the University of Puerto Rico and Vassar College, where officials defended Murra from the government’s efforts to have him deported. He spent two years in the late 1950s teaching and doing archival researc