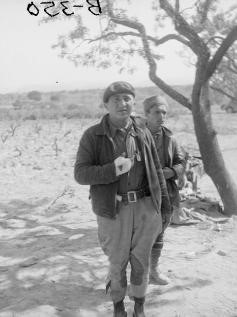 Brandt, Joseph (Brustein, Sam); b. December 24, 1909 (1907), Zambraw, Poland, Naturalized through parents, to the US at 15; Polish American; Education as an apprentice; Single; Printer and CP Functionary; YCL 1925 and CP 1927 (1926); Received Passport# 484474 on November 11, 1937; Sailed November 17, 1937 aboard the Queen Mary; Arrived in Spain on December 1, 1937; Served with the XV BDE, Lincoln-Washington BN, Plaza Mayor; Rank Soldado; Returned to the US on December 20, 1938 aboard the Ausonia; WWII US Army, 1st Special Service Force; d. July 1997. Source: Cadre; Inventory North Americans; Pay; RGASPI; ALBA 236 Joseph Brandt Scrapbooks. Code A1 Biography: Born Sam Brustein in Poland in 1909, Joseph Brandt immigrated to New York City at the age of fifteen and joined the Young Communist League two or three years later. He was working in Ohio as an organizer for the Communist Party in 1937, but soon joined the Abraham Lincoln Brigade in response to the Communist International's appeal for volunteers. Brandt took part in several well-known engagements during the Spanish Civil War, including the attempt to warn Loyalist troops of the Gandesa-Batea fascist offensive in March of 1938 and the late-night covert operation in which Robert Merriman and David Doran lost their lives. Brandt himself was wounded by enemy fire twice, during the retreat from Gandesa and then in an offensive around the area of Quatro Camisos. He returned to the United States in December of 1938. On his return, Brandt married Sylvia Opper, whom he had met during a Works Progress Administration (WPA) strike in Cleveland. He continued to organize for the Communist Party's District 6 in Ohio. During World War II, he served as a paratrooper in the joint U.S.-Canadian special forces unit known as the "Devils Brigade," carrying out commando missions behind Nazi lines in France. After the war, he remained active in the Communist Party and was forced to go underground to avoid prosecution under the Smith Act, but was eventually arrested by the FBI and served six months in jail. Brandt served on the national committee of the CPUSA for many years and remained an active member until his death in July 1997 at the age of 87. Brandt was especially concerned with documenting and publicizing the contributions of the African-Americans who fought in the International Brigades. In 1979, with the help of a group of Veterans of the Abraham Lincoln Brigade (VALB) members and New Outlook Publishers, he produced a pamphlet titled Black Americans in the Spanish People's War against Fascism, 1936-1939.- Courtesy of Tamiment Library, NYU. Photograph: Joseph Brandt, April 1938. The 15th International Brigade Photographic Unit Photograph Collection; ALBA Photo 11; ALBA Photo number 11-0143. Tamiment Library/Robert F. Wagner Labor Archives. Elmer Holmes Bobst Library, 70 Washington Square South, New York, NY 10012, New York University Libraries.