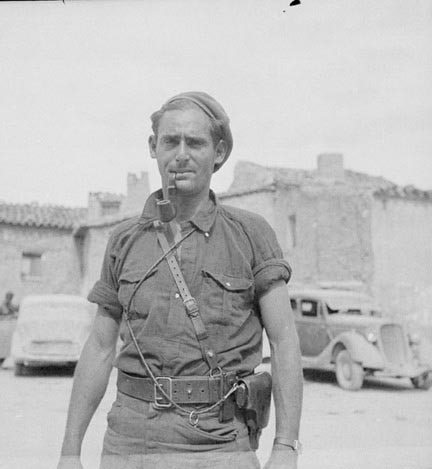 Dallet, Joseph, Jr. Graduated from Dartmouth in 1927; Married (Seperated); Party Organizer; CP; received passport# 371331 on March 3, 1937 which listed his address as 377 East Lucius, Youngstown, Ohio, 29 years old; Sailed March 10, 1937 aboard the Queen Mary; Arrested by the French border patrol as he attempted to cross by boat into Spain, Jailed, after a trial he entered Spain in April 1937; Served with the XV BDE, MacKenzie-Papineau Battalion, BN Commissar; Killed in action October 13, 1937, Fuentes de Ebro.

Joseph Dallet, Jr.(1907-1937) was born into an affluent family in Woodmere, NY on Long Island. His parents, Joseph Sr. and Hilda, provided a childhood filled with cultural and educational opportunities and travel. Dallet attended the Woodmere Academy prior to high school, and eventually enrolled at Dartmouth University. He would have graduated in 1927, but became disillusioned with formal education and left. After working for a short time in the insurance business, he moved in 1928 to the Midwest and became involved with the labor movement. Repudiating his privileged background, he worked as a longshoreman in the late 1920s and in the steel mills of Pennsylvania and Ohio in the early 1930s. A militant labor organizer, he joined the Communist Party, U.S.A. in 1929. In the same year he married his first wife, Barbara Rand, who was also active in the labor movement; they would later divorce. During the next several years he lived in Pennsylvania and Ohio, where he became a member of the Communist Party of Ohio. Known as a political militant who affected a tough, pseudo-proletarian style, he became a well-known figure in working-class communities throughout the Midwest, organizing rallies, leading meetings and giving speeches. He ran for mayor of Youngstown, OH on the Communist ticket in 1935. In 1934 Dallet met and married his second wife, Katherine (Kitty) Peunig (later to become Mrs. J. Robert Oppenheimer). Dallet's interests eventually turned toward helping the Spanish Republic defeat General Franco and his fascist rebels. He signed on with the Abraham Lincoln Brigade in New York, and in March of 1937 sailed to Europe with plans to enter Spain via the French border. On March 27th, however, he and a group of volunteers were arrested just off the coast of Spain by French authorities. After serving twenty-one days in prison, Dallet tried again to make his way to Spain, succeeding on April 22nd by way of the Pyrenees. Because of his years of political and organizing experience, Dallet was appointed as a Commissar, with responsibilities for political indoctrination, education, and morale-building, in the Mackenzie-Papineau Battalion, a unit comprised of both Canadian and U.S. volunteers. The Battalion was mustered into the International Brigade in July 1937. Dallet was sometimes resentful of the political assignment that kept him from front-line action, and his harsh, authoritarian leadership style drew criticism from the ranks. At last he got his chance, and on October 17, 1937, while leading his unit into battle on the Aragon Front, he was shot and killed. At the time of his death, Kitty was on her way to Paris in hopes of traveling to Spain to visit him, and to work in some capacity for the Loyalist cause. -courtesy of Tamiment Library, NYU.