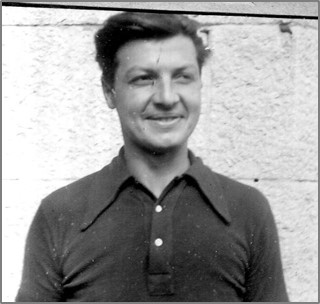 Cohen, Morris (Altman, Israel; Pickett, Bruce); b. July 7 (2), 1910, NYC; Russian American; Parents Harry Cohen, mother Sarah Cohen; Attended NYU 1929-30, Graduated from Mississippi State University with a BS 1934, 1934-35 University of Illinois, completed 2 years graduate work at Columbia University and Mississippi State University; Single; Newspaperman; YCL October 1935 to May 1936, CP January 2, 1936 unit organizer and section leader; Received Passport# 458513 which listed his address as 1226 Sherman Avenue, NYC (124 Grand Concourse, Bronx, NY); Sailed July 21, 1937 aboard the Berengaria, group leader to Spain; Arrived in Spain and entered the IB on August 5, 1937; Served with the XV BDE, Mackenzie-Papineau BN, MG Co. Section 3, elected political delegate August 15, 1937 moved into Transmissiones; Trained for guerilla work; Guard Company Albacete; Castel de Fels, Case Especial en Barcelona; Last unit Mackenzie-Papineau BN, Co. 1; Rank Soldado; Served at Fuentes de Ebro; WIA at Fuentes de Ebro hit in both legs, in hospital Murcia for four months, served as commissar, In February 1938 sent to Tarazona; Returned to the US on December 20, 1938 aboard the Ausonia; WWII US Army; d. June 23, 1995, Moscow, Russia, buried in Moscow, Russia; Cohen spied for the Soviet Union in the Post-WWII period; He was instrumental in the espionage ring that passed the secrets of the Atom bomb to the Soviet Union. Source: Sail; Scope of Soviet Activity; Cadre (under Altman, Isreal); Inventory North Americans (under Altman, Israel); RGASPI Fond 545, Opis 3, Delo 455, ll. 92; Opis 6, Delo 1541, ll. 89-90, Biografia de Militantes (under Pickett, Bruce); Opis 6, Delo 856, ll. 77-79 (under Altman); Mac-Paps; Pay; USSDA 2:0456, 53:0366; (obituary) The Volunteer, Volume 17, No. 2, Fall 1995, p. 6; (obituary) "Morris Cohen, 84, Soviet Spy Who Passed Atom Plans in 40's," New York Times, July 5, 1995; Peter Carroll, “ALBA Acquires Rare Letter From Future Spy,” The Volunteer, Volume 24, No. 2, June 2007, pp. 4-5, 10; L-W Tree Ancestry. Code A Biography Morris Cohen was born to Russian Jewish immigrants in New York City in 1910. He attended public schools, graduated from James Monroe High School in the Bronx, won a football scholarship to attend the University of Mississippi, and subsequently transferred to the University of Illinois. There he joined the Young Communist League and returned to New York City as an organizer for the YCL. He departed the United States for Spain in 1937, using the passport of Israel Altman, his nom de guerre. Wounded in his first action on the Aragon front in 1937 while serving in the Mackenzie-Papineau battalion, Cohen was chosen for a special detachment, where he learned radio transmission and other guerrilla tactics from Spanish and Soviet instructors. "They were thinking of the future," he later told historian Peter Carroll. "Fascism had to be fought, and the Soviet Union was [the] leading opponent of fascism." After returning from Spain in 1938, Cohen began to work for Soviet intelligence in New York. According to documents released by the secret KGB in 1992, Cohen made contact with a physicist assigned to the top-secret Manhattan Project to build an atomic bomb, and he arranged to provide scientific information to the Soviet Union. Before the plan could be implemented, however, Cohen was drafted into the U.S. Army, where he served in the quartermaster corps. He was eventually assigned to the European theater of war and participated in the liberation of a German concentration camp. In his absence, Cohen's wife Lona journeyed to New Mexico and acquired secret atomic bomb information, which she then passed on to Soviet agents. The Cohen's subsequent role in this project is unknown. After the FBI arrested Julius and Ethel Rosenberg in 1950, however, the Cohens disappeared. When U.S. officials captured the Soviet spy Rudolph Abel in 1957, they found in his possession photographs of the Cohens. Four years later, the British government arrested 50-year old Peter Kroger and his wife, Helen, in London on charges of stealing naval secrets related to an atomic submarine. Although the couple posed as New Zealand-born booksellers, police found sophisticated espionage apparatus and a radio transmitter in their home. Finger print checks disclosed that the Krogers and the Cohen were the same people. Sentenced to twenty years in prison, the Cohens were exchanged for a British businessman held by the Soviets in 1969, and they lived the remainder of their lives in Moscow, where they were regarded as heroes. "It was unthinkable to me," said Morris Cohen in justifying his activities, "that one country should hold a monopoly of such a powerful weapon." Lona Cohen died in 1992, Morris Cohen in 1995. Photograph: Morris Cohen in Spain, RGASPI Fond 545, Opis 6, Delo 1541, ll. 89.