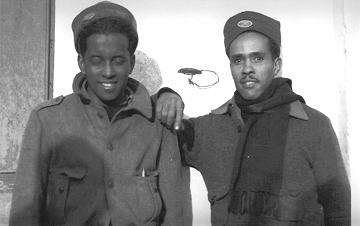 k-Reeves, Otto Coleman. b. 1914, Cleveland, Ohio; African American; High School education; Single; Student; YCL 1936; Received Passport# 27636, San Francisco series, on May 7, 1937 (1518 W. 5th Street, Dayton, Ohio); Sailed May 15, 1937 aboard the Georgic; Arrived in Spain via Espolla on June 10, 1937; Served with the XV BDE, 24th BN, American Co. at Fuentes del Ebro; Mackenzie-Papineau BN, MG Co. Gun commander (?), Served at Teruel and the Retreats; Killed in action April 17, 1938, Belchite, during the Retreats. Verify date for death, likely March. Sources: Scope of Soviet Activity; Cadre; Figueres List; RGASPI Fond 545, Opis 6, Delo 565, ll. 38 (ver ar gen can); African Americans; Moishe Brier, “Three Friends, Three Volunteers,” The Volunteer. Code A Biography: Otto Coleman Reeves was born in Dayton, Ohio, on June 26, 1913. His father was the minister of a storefront church and a construction worker. When his father became unemployed during the Depression, Reeves left home to lessen the burden on his family. He eventually made his way to Los Angeles, California. Reeves, who had graduated high school in Dayton, was able to get a live-in job as a cook and housekeeper in a fraternity house at the University of Southern California. His political activities began when one of the white students in the fraternity invited him to go to a rally for the Scottsboro case. This student also took Reeves to Communist Party meetings and demonstrations. Reeves joined the YCL in 1936. He departed for Europe aboard the Georgic on May 15, 1937. In Spain, Reeves served with the Mackenzie-Papineau Battalion as a machine gunner. Morris Brier, who served with him there, recalls that Reeves said he had come to Spain for two reasons: "One, to prove to myself that I am capable of risking my life for something I thought was correct, and two, I was testing the Communist party and its white members; whether they really meant they were our friends." During the fighting at Fuentes de Ebro, Reeves although badly hurt managed to pull another wounded soldier to safety. After recovering, Reeves was placed in command of a machine gun company. Reeves was wounded a second time during the Battle for Teruel. On April 17, 1938, during the Retreats, when his company was virtually surrounded and supplies were running low, Reeves volunteered to lead a patrol back to the battalion's command post to pick up ammunition. Neither Reeves nor any of the men in the patrol were seen again. It is believed that they were either killed in action or captured and subsequently executed. ~ Chris Brooks Photograph: Otto Reeves and Frank Alexander, Mackenzie-Papineau Battalion, December 1937. The 15th International Brigade Photographic Unit Photograph Collection ; ALBA Photo 11; ALBA Photo number 11-0995. Tamiment Library/Robert F. Wagner Labor Archives. Elmer Holmes Bobst Library, 70 Washington Square South, New York, NY 10012, New York University Libraries.