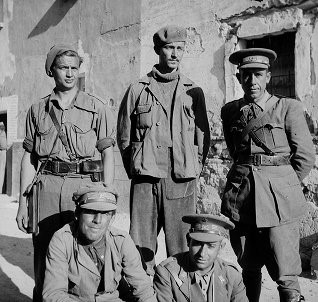 Robert George Thompson was an American Communist and hero of the World War II Pacific Theater who was imprisoned by the United States government during the 1950s Red Scare on account of his commitment to communist beliefs. Born on June 21, 1915 in Grants Pass, Oregon, Thompson fought on the side of the left-wing Spanish Republicans in the Civil War in Spain, attaining the rank of battalion commander with the all-American volunteer Abraham Lincoln Brigade. Thompson saw action during World War II in the Pacific Theater; cited for “extraordinary heroism” during the American New Guinea Campaign, he won the United States Army’s Distinguished Service Cross and approval for a battlefield commission as an officer. Convicted alongside the rest of the Communist Party USA leadership of violating the Smith Act, he escaped on bail, going underground, only to be recaptured and sent to prison in the early 1950s. While serving out his sentence, Thompson was assaulted by a group of Yugoslav fascists who had jumped ship in the United States, one of whom cracked Thompson’s skull with a metal pipe while the veteran was standing on a lunch line. It is widely believed that he died as a result of his injuries not long afterward. Undeterred, Thompson continued with Communist Party work after his release, including organizing protests against the Vietnam War. He suffered a fatal heart attack on October 16, 1966. The United States Army posthumously denied him a burial at Arlington National Cemetery. Striking a dissenting chord days after his death, Pulitzer Prize-winning journalist Murray Kempton wrote: “And so, an American who was brave has been judged and disposed of by Americans who are cowards of the least excusable sort, cowards who have very little to fear. Yesterday the Army called Robert Thompson’s widow and said that it would send his ashes wherever she wished. Wherever those ashes go, the glory of America goes with them.” – Biography courtesy of Wikipedia.