k-Horzich, Simon (Sime Horzic; Sam); b. 1898, Ruca, velika Gorica, Croatia, to the US in 1913; Croatian American; Steel Worker and CP Organizer in the Steel and Metal Worker’s Industrial Union (SMWIU); Socialist Party, CP (1919?), member of the Bureau of the CPUSA Yugoslav Section; Received Passport# 209730 on June 11, 1935 which listed his address as 1809 South Fisk Street, Chicago, Illinois; Sailed January 28, 1937 aboard the Aquitania; Arrived in Spain in January 1937; Served with the XV BDE, Dimitrov BN; Served at Jarama; Died in hospital on April 3, 1937 from wounds suffered at Morata de Tahuña. Sources: Scope of Soviet Activity; South Slav; Spisak, in Spanija, 5 : 526.
Clipping:   3 Chicago Communists Die for Spanish People Daily Worker May 27, 1937, p. 2 Illinois District of Party Pledges to Honor Their Memory by Giving All Possible Aid to Spanish Democracy CHICAGO, May 26. – Expressing its sorrow at the death of thee of its comrades in Spain, the Illinois District of the Communist Party made the following pledge to “Our Fallen Comrades”: “The State Committee of the Illinois Communist Party expresses its grief at the death of Comrade Sam Horzich, Milton Pekow and John Kunz. Members of our Party, when the great call came they were among the first to volunteer unhesitatingly to join the ranks of the Great People’s Army which is battling the beast of fascism on the fields and mountains of Spain. They died the death of heroes. But, though we mourn their death we pledge to avenge them by working to aid Spanish democracy in every moral and material way .”at our disposal, by forging a mass Communist Party in the State of Illinois, and by building the circulation of the Daily Worker, the paper which has been the staunchest fighter for the cause for which they gave their lives, the cause of Spanish and World Democracy.”— Morris Childs, State Secretary of the Communist Party. Photograph: Simo Horzich periodista caído en el frente del Jarama. Simon Horzich from newspaper clipping collection. 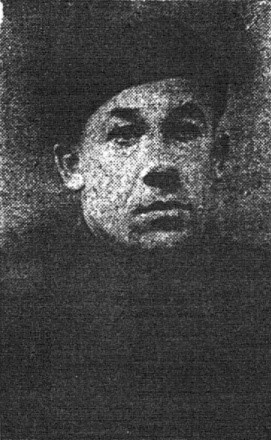