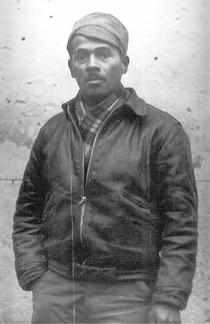 Love, Vaughn Costine. b. December 5, 1907, (December 8) Dayton, Tennessee; African American; Father James Love, mother Bertha Love, both deceased; Attended Bluefield College for 2 years and West Virginia State 1 year; No prior military service; Single; Laborer; AFL, CP 1934, unit organizer and organized Federal Theater unit, Spanish CP; Received Passport# 6325 on 742 St. Nichols Avenue, NYC; Sailed February 20, 1937 aboard the Ile de France; Arrived in Spain on March 13, 1937; Served with the XV BDE, Washington BN, Co. 1, Section 1; and Lincoln-Washington BN, Co. 1; Attended OTS after Brunete; Assigned as Section Leader in Co. 1 in December 1937; WIA Teruel; Rejoined BDE shortly after the Retreats; Served as a section leader in Co. 1 of Lincoln-Washington BN, Co. 3, Ebro Offensive; WIA August 19, 1938; Returned to BDE on September 12, 1938 attached to the BN Plaza Mayor, appointed Chief of Headquarters section; Rank Cabo April 1, 1937, Section political leader May 1937, Sargento November 21, 1937, Teniente August 18, 1938; Served at Brunete (Canada, Mosquito Hill, Villa Nueva del Pardillo), Teruel, and Ebro Offensive (Sierra Pandols, Sierra Caballs); Returned to the US on December 20, 1938 aboard the Ausonia; WWII civilian; d. October 27, 1990.
Biography: Vaughn Love was born in Dayton, Tennessee, on December 8, 1907 to an interracial family. He moved to West Virginia as a teenager. After graduation from high school, Love attended Bluefield College where he played football with considerable success. After two years, Love transferred to West Virginia State College on a football scholarship. An injury ended his football career and he left West Virginia for New York, hoping to attend Columbia University. Love arrived in New York in 1929, as he put it "just in time for the Depression." In New York he became involved with the Federal Theater Project. This led to connections with the League of Struggle for Negro Rights and the Southern Labor Committee. Love joined the Communist Party in 1934. Years later, Love recalled that when civil war broke out in Spain, "we didn't know too much about the Spaniards, but we knew that they were fighting against fascism, and that fascism was the enemy of all black aspirations." The first time Love came into contact with a Spanish peasant, unfamiliar with black people, he attempted to wipe the dirt from his face. When Love explained that he was a Negro from North America, the peasant hugged him and exclaimed, "Oh, los esclavos! Si! Si!" Love says, "they knew there was black slavery in America, 'los esclavos,' and that they were only one little step away from us los esclavos." Love left for France aboard the Ile de France, on February 20, 1937. In Spain, Love was assigned to the first company of the Washington Battalion and served as his section's political leader. He fought through the Brunete campaign and remained with the first company after the Lincoln and Washington battalions were merged. After Brunete, Love was sent to Officers Training School. On completion of his training, he rejoined the Lincoln-Washington Battalion and took over a section of his former unit, Company One. On January 5, 1938, four days after the XVth Brigade entered the lines at Teruel, Love was wounded in action. He was still hospitalized at the time of the Retreats and his hospital group was among the last to cross the bridge at Tortosa before the bridge was destroyed in the face of the advancing Nationalists. After the Retreats Love rejoined the decimated Lincoln-Washington Battalion as a section leader and helped train the young Spanish conscripts who were brought in to bring the unit up to strength. Love's section received the benefit of his experience and training. During the Ebro Offensive, Love was again wounded while fighting in the Sierra Pandols on August 19, 1938. After a short hospitalization he returned to the Battalion on September 12, and was appointed Chief of the Headquarters Section. Love remained with the Battalion through the fighting in the Sierra Cabals and until the Internationals were withdrawn on September 24, 1938. His final rank was Acting Lieutenant. Love returned from Spain on the Ausonia, on December 20, 1938. In the United States Love resumed his work with the Communist Party. When the United States entered World War II he joined the Army and served in the Quartermaster Corps advancing to the rank of Sergeant. Love was wounded in France and repatriated. After the war, Love married and lived in New York balancing political activities with a career in the communications field. He died on October 27, 1990. ~ Chris Brooks
Sources: Sail; Scope of Soviet Activity; Cadre; Pay; Washington; RGASPI Fond 545, Opis 6, Delo 937, ll. 79-90; Opis 6, Delo 1005, ll. 50; ALBA 071 Vaughn Love Papers (memoir). Note: Box 2, Folder 23, 177_197042 [List of Names] Moscow Fond 545, Opis 5, Delo 197, ll. 42, Oct. 1938. This is a page from Folder 197: Album of 15th International Brigade Presented to the American Communist Volunteers of the 15th Brigade by the Communist Party of Spain. On a two page spread entitle Declaration of the American Negro Comrades eighteen individuals signed the second page. Code A Photograph: Vaughn Love, Lincoln-Washington Battalion, December 1937. The 15th International Brigade Photographic Unit Photograph Collection ; ALBA Photo 11; ALBA Photo number 11-1294. Tamiment Library/Robert F. Wagner Labor Archives. Elmer Holmes Bobst Library, 70 Washington Square South, New York, NY 10012, New York University Libraries.
Birth City Dayton
State Tennessee
Education College/University 1 Bluefield College
Education College/University 2 West Virginia State University
Ship Ile de France
Vocation 1 Laborer
Party Affiliation CP
Wound in Action WIA August 19, 1938