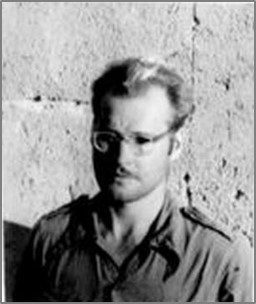 Schuetrum, Walter J., Jr. b. October 18, 1911, Superior, Wisconsin; 2 years Wisconsin State University, studied Zoology; Single; Student; CP 1936; Received Passport# 448429 on June 22, 1937 which listed his address as 1508 North 21st Street, Superior, Wisconsin; Sailed July 7, 1937 aboard the President Roosevelt; Arrived in Spain via Espolla on July 24, 1937; Served with the Evacuation Group, Ambulance Driver; Later to XV Brigade, Mackenzie-Papineau Battalion; 15th Corps Evacuation, Driver; Rank Soldado; Returned to the US on December 20, 1938 aboard the Ausonia; WWII, US Army, Tech 4; d. February 16, 1986, San Mateo, California, buried in the Golden Gate National Cemetery, San Bruno, San Mateo County, California; Wife Viola D. Schuetrum. Sources: Sail; Scope of Soviet Activity; Cadre; Figueres List; Mac-Pap; Canadian; RGASPI; ALBA 136 Walter Schuetrum Papers; ALBA PHOTO 247 Walter Schuetrum Photographs; Find-a-Grave# 3630986. Biography: Walter J. Schuetrum was born in Superior, Wisconsin on October 18, 1911. The son of a German-American miner turned switchman for the Great Northern Railroad who was an avid trade-unionist, Schuetrum early in his life developed a concern for political and labor issues. In 1937 he volunteered for service with the Loyalist forces in Spain. In Spain he became an ambulance driver, and was present at many of the War’s crucial battles. In the aftermath of the Battle of Teruel he was reported deceased, misinformation that was publicized in Wisconsin Newspapers and only corrected after he wrote a letter to his family assuring them of his safety. After the Spanish Civil War, Schuetrum returned to Wisconsin with his close friend and fellow veteran Randall "Petet" Smith and soon after moved with his wife, Viola Gruenhagen Schuetrum, to San Francisco. On the West Coast, he got a job as a longshoreman and became an active member and organizer for the International Longshoremen's and Warehousemen's Union. During World War II, Schuetrum joined the U.S. Army, but because of his involvement in the Spanish Civil War, was barred from fighting overseas and instead worked as an instructor on land ships at the Indiantown Gap Military Reservation in Pennsylvania. He was discharged in 1946, and went on to get his seaman's papers and work work on merchant ships in the Pacific, where he organized for the National Maritime Union. In 1961, Schuetrum, along with other veterans of the Abraham Lincoln Brigade and the Medical Service, was invited to the German Democratic Republic and spent three months there. In the same year, with other veterans who were on that trip (including nurse Sana Goldblatt and Steve Troxell), Schuetrum helped to establish the Bay Area Post of the Veterans of the Abraham Lincoln Brigade (VALB). Although he never held an administrative position in VALB, he was nonetheless directly involved in many of its activities and proceedings. He returned to East Germany three times in the 1970s and traveled to Spain with other U.S. veterans in 1982. He died in 1986. Sources: Fontana, Nancy. “Walter Schuetrum, My Father”. The Volunteer Vol. III, 2 (Oct. 1986)
Photograph: Walter Schuetrum in Spain, RGASPI Fond 545, Opis 6, Delo 983.
Birth City Superior
State Wisconsin
Education College/University 1 Wisconsin State University
Ship President Roosevelt
Vocation 1 Student
Party Affiliation CP
WW II Service US Army