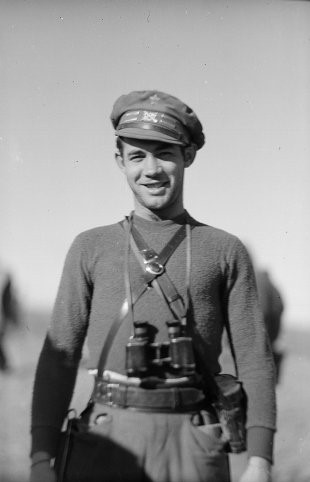 The XVth's commander, Colonel Copic, sent us as liaison officer, a sturdy American of medium height with a flat nose and the biceps of a boxer. This American (I do not remember his name) was always smiling as if he were a candidate for president of the USA. I only knew that he did not belong to the Party because he was never invited to our Spanish Communist Party cell meetings. Once, several officers were talking about suicide. None of those present favored suicidal acts. One remarked that suicide was an escape and cowardly. Another said that it was an unbecoming act for a Communist. Throughout this discussion, the American smiled and, at the end, said "It's very simple, you know. Do you know how it's done? You put the barrel to the temple" … and with that, he pulled out his revolver and put it to his temple. "Hey, look out!" everyone screamed. "It may be loaded!" "No, it's not loaded," he laughed. He pulled the trigger and fell dead. To this day, I cannot explain this death. This American was a good officer; serious officers do not joke like that. Was it suicide for another reason? Is that possible with such a smiling, cheerful face? If this was no suicide, it must have been a sad, stupid accident.