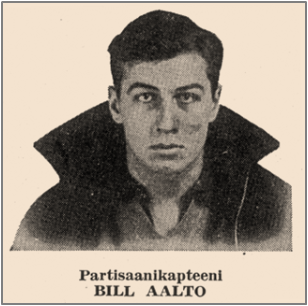 Aalto, William Oliver (Alstrom, William Oliver; Aalto, William Eric; Alstrom, Guillermo); b. July 16, 1916 (July 30, 1915 on L-W Tree Ancestry), NYC; Finnish American; father Otto Aalto, mother Elsa Aalto; Guerrilla; Attended Theodore Roosevelt High School in Bronx, New York; Prior military service as a cadet; Single; Printer’s apprentice and Driver; YCL 1935, Spanish CP March 1937; Received Passport# 364889 (under William Alstrom) on February 4, 1937 which listed his address as 3327 De Lavall Avenue, Bronx, New York; Sailed February 6, 1937 aboard the Paris; Arrived in Spain and entered the IB on February 10, 1937; Served with the XV BDE, Auto Park, Driver; On February 20, 1937 he transferred to in 157th Bridge, 165th Brigade, 154th Brigade and finally XIV Corps, 48th DIV, 230 BDE. Guerrilla leader; Served as group Commissar; Rank Captain; Rose from adjutant Commander in Co. 5 to Commander of the 230 Brigade; Cabo May 1937, Sargento June 1937, Teniente May 1938, Capitan June 1938; Returned to the US on February 4, 1939 aboard the President Harding; WWII US Army, joined December 1941 served as 1st SGT transfer to OSS April 12, 1942; Dismissed after he was identified as a homosexual by other Lincoln veterans, He returned to the Army; Discharged February 11, 1944, due to training accident; Attended Columbia after the war and had several piece of his writing published in New Masses, Later drifted into alcoholism; d. June 11, 1958, NYC, buried at Section Y Site 2655 in Pine Lawn Cemetery, now the Long Island National Cemetary in Farmington, Long Island, Aalto was one of several homosexual volunteers. Source: Sail (under Alstrom); Scope of Soviet Activity; Cadre; Americans; RGASPI Fond 545, Opis 6, Delo 855, ll. 1-20, includes his Spanish CP Carnet; Opis 6, Delo 1026, ll. 1; Finnish; Biographical information from Victor Berch; MPE; Helen Graham article The Volunteer; L-W Tree Ancestry; Find-a-Grave#(under Alstrom) 250086. Code A Biography William Oliver Aalto, of Finnish extraction, was born in the Bronx, New York on 30 July 1915. His mother, a militant member of the Finnish Communist Party, had fled to the United States due to her radical political beliefs. She enrolled in the local communist party, educating her son with Marxist ideology. After leaving school, he worked as a truck driver and was a member of the Young Communist League. Aalto arrived in Spain on 17 February 1937, joining the other International Brigades at Albacete. In March 1937 he joined the Spanish Communist Party. During the war, he volunteered for dangerous guerrilla operations which frequently required him to work behind enemy lines for up to weeks at a time. Working with International brigaders, Alex Kunslich and Irving Goff, Aalto was trained by Soviet instructors in the use of pressure-sensitive explosives to destroy railroad tracks, bridges and power lines. One of their objectives was the destruction of the main supply bridge spanning the Albarracín River. The operation may have been the inspiration for Ernest Hemingway's novel For Whom the Bell Tolls. At the end of 1937, Aalto took part in the Battle of Teruel, working behind enemy lines again with Kunslich, Goff and Spanish guerrillas. On 23 May, 1938, Aalto, now a lieutenant, led the successful amphibious operation at Carchuna, Motril on the southern coast of Spain, which resulted in the rescue of 300 Republican prisoners held in the Fort of Carchuna. This raid constitutes the only operation of its kind ever undertaken by the Spanish army. In September 1938, with a Republican defeat in sight, the Abraham Lincoln Battalion was withdrawn from the front line and shortly afterwards disbanded. William Aalto returned to the United States. During his time in Spain, Aalto wrote: "A soldier who is politically conscious that he is right and who has a feeling of community with his society... will do his job well.". In 1941, Aalto's former comrade-in-arms, Irving Goff, recommended him for recuitment to the Office of Strategic Services. At this time, Aalto confessed to Goff that he was a homosexual. Goff and other OSS Lincoln veterans reported the fact to the organization's head, General William Donovan, requesting for him to be removed from their team. In 1942, Aalto was transferred to a training camp at Camp Ritchie, Maryland. In September 1943, while training soldiers in demolition work, Aalto saw someone drop a live grenade and lunged for it. Before he could throw it away, the bomb exploded, severing his arm at the wrist. With the help of his disability pension and the G.I. Bill, he returned to further his education, studying poetry at Columbian University. At this time, he published several pieces of his writings in the New Masses. After his betrayal by the OSS Lincoln veterans, Aalto drifted away from contact with the Veterans of the Abraham Lincoln Brigade. Aalto then travelled to Europe, where he met the poet W.H. Auden. Though sharing the company of other poets, Aalto now wrote little and tended towards alcoholism, frequently becoming violent. Toward the end of his life, he was poet James Schuyler's lover, and features in the latter's poem Dining Out with Doug and Frank. William Aalto died of leukemia in June 1958, and was buried in Long Island National Cemetery. - courtesy of Wikipedia. Bill Aalto Interview (Irving Goff on), LBA V 48-001, undated, Manny Harriman Video Oral History Collection; ALBA VIDEO 048; box number 1; folder number 19; Tamiment Library/Robert F. Wagner Labor Archives, New York University. Photographs: William Aalto. Meidän Poikamme Espanjassa (Our Boys in Spain); and below from RGASPI Fond 545, Opis 6, Delo 855, ll. 1a. 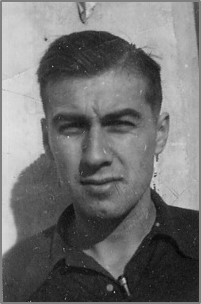