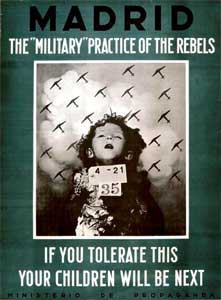 Both camps in the Spanish Civil War–the Republicans and the Nationalists–were quite aware of the need to convince public opinion of the fact that they, and not their enemies, were on the right side and deserving of support. In the late 19th century the poster had become a preferred medium for mass communication and persuasion, in politics as much as in commerce. The Spanish Civil War generated an enormous amount of poster art. These posters were directed at the Spanish population or at international public opinion; and they were commissioned by the Spanish government, military authorities, or other groups and associations such as unions and political parties. What sets the poster art of the Spanish Civil War apart is not just the sheer number of posters produced but also their artistic quality. Prominent graphic artists put their talents at the service of politics, and many posters incorporate cutting-edge techniques and technologies, including photomontage. Spanish Civil War posters are a great teaching tool, allowing students to think about the way in which words and images can be mobilized–or manipulated–to persuade the viewer. Since some posters are easier to decipher for a 21st-century American audience than others, this is also a great way to encourage students to think about the way in which particular images are specific to cultures, (political) communities, and historical moments. For a Social Studies lesson plan involving Spanish Civil War posters, click here.

An interesting visual companion piece to posters are the many children’s drawings available. During the civil war, children were evacuated from conflict zones in Republican territory and housed in “colonias,” where Quaker social workers helped them cope with their war experience through art therapy. The children’s drawings became part of an exhibit, “They Still Draw Pictures,” which toured the United States to raise funds for the Republican Cause (the catalog is online at archive.org). “It was amazing to see how many of these children could draw and draw well,” the novelist Dorothy Parker, who visited some of the colonias in 1937, wrote in The Volunteer; “and it was heartening to see how their talent was encouraged by the teachers. When they first came to the colony, the children drew the thing that were nearest and deepest to them-they drew planes and bursting bombs and houses in flames. You could see by the dreadful perfection on detail, how well they knew their subjects. Now they are drawing flowers and apples and sail boats and little houses with smoke coming out of the chimneys. They are well children now.” For a Social Studies lesson plan involving these children’s drawings, click here.

This two-part PowerPoint contains pairs of poster images from the Republican and Nationalist side.