History: The Abraham Lincoln Brigade and the Spanish Civil War

The Spanish Civil War broke out in July, 1936, after a group of conservative military tried to overthrow the progressive government of the Popular Front, elected in February of the same year. Expecting an easy coup, the military rebels were surprised to encounter massive popular resistance, especially in the large urban centers. In a matter of days, the country was split in half, with one zone controlled by the government (known as Republicans, Loyalists, or Reds), and the other by the rebels (also referred to as Nationalists, Fascists, or Whites). Three years of bloody fighting followed. General Franco quickly emerged as the Nationalist commander in chief. The main leaders on the Republican side were President Azaña and Prime Ministers Largo Caballero and Negrín. The war ended with a Nationalist victory on April 1, 1939; Franco would rule Spain as a ruthless dictator until his death in 1975. 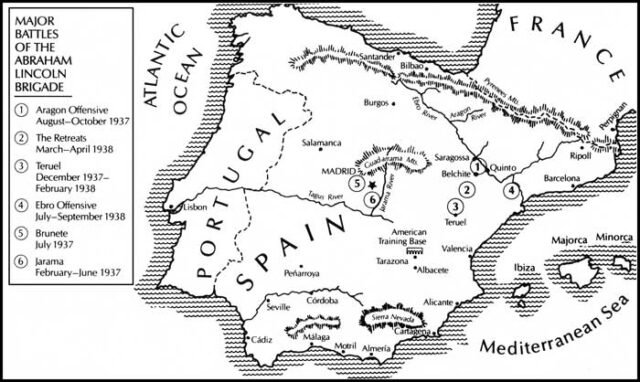 The war quickly became internationalized. Global public opinion rallied around one of the two factions, seeing the war as either a struggle of democracy against fascism or, conversely, of Christian civilization against Communism. Fearful of escalation, several Western governments signed a Non-Intervention Pact. It was a dead letter from the outset. Franco immediately requested and received extensive military support from Nazi Germany and fascist Italy. The Republic was in turn supported by the Soviet Union and, to a smaller extent, by Mexico. The other Western powers refused to stand by the embattled Republic, not even allowing it to buy arms on the international market. Nevertheless, thousands of concerned citizens from some fifty nations, ignoring their own governments’ purported neutrality, rallied to the Republic’s support. Almost forty thousand men and women, including 2,800 Americans, traveled to Spain to help fight fascism. Most of them joined the International Brigades, organized in 1936 by the Communist International. The U.S. volunteers in Spain formed several battalions and served in various units (medical, transportation) and came to be known collectively as the Abraham Lincoln Brigade.

For all its international repercussions, the war’s root causes were domestic. Political and social tensions had been building up in Spain for years. Still predominantly an agrarian society with limited industrial centers, the country was rife with inequalities. In the countryside, traditional divisions endured between wealthy landowners, doggedly preserving their position, and a huge number of landless laborers and poverty-stricken smallholders, desperate to lift themselves from an existence of near-starvation. The situation of the urban working class was equally dismal. Illiteracy rates were high. The government that came to power after the proclamation of the Republic in 1931 embarked on an ambitious program of modernization, secularization, social justice, and greater regional autonomy, with the support of the liberal middle classes, the Socialist and Communist parties and unions, the regionalist parties, as well as the powerful Anarchist movement. It met with strong resistance from the landowners, the army, and the Catholic Church. These same three groups, together with the small but powerful fascist party (Falange), formed the backbone of the Nationalists.

The Spanish Civil War claimed an estimated 500,000 dead; of the American volunteers about one third died in Spain. Many of the remaining veterans continued their fight against fascism during World War II, as did thousands of Republican exiles. With their help, fascism was finally defeated in 1945. Ironically, the outbreak of the Cold War helped secure Franco’s position as Spain’s anti-Communist dictator. When, after his death in 1975, Spain finally became a democracy, the Spanish government made honorary citizens of the international volunteers. Many of them remained life-long activists. The aging Lincoln Vets have lent their support to progressive causes of all kinds, from the Civil Rights movement to the protests against the wars in Vietnam and Iraq.

Check out our bookshelf at Powell’s online.